Ariadne is a Persona in the series.

Ariadne was the daughter of King Minos of Crete, the owner of the Minotaur. When Theseus came to Crete to end Minos's annual demands that Athens send 7 men and 7 women to sacrifice to the Minotaur, Ariadne fell in love with Theseus. She gave him a sword to fight the Minotaur and a ball of string so he would be able to find his way out of the labyrinth

After Theseus achieved his goal, Ariadne eloped with him. On the way back to Athens, they stop to the island of Naxos. Due to a false alarm of the Cretan fleet pursuing them, Theseus' crew fled the island the next morning, unwittingly leaving Ariadne behind. A short while later, Dionysus saw the abandoned Ariadne and took her in order to be his wife. Since then she remained faithful to him, but she was killed by Perseus at Argos. Dionysus however descended into Hades and brought her and his mother Semele back. They then joined the gods in Olympus.

Ariadne is the Persona of Labrys, gained after she accepts her Shadow upon its defeat by the player. Matching the myth, Ariadne uses a string that appears like a maze in her attacks.

Ariadne appears in the final chapter of the manga when Labrys accepts her shadow after Yosuke Hanamura and Aigis defeat her.

"A Persona of another story. She is the daughter of Minos, the king of Crete. She helped Theseus defeat the Minotaur and gave him a ball of yarn so he could escape the labyrinth."
—Persona 5 Compendium

Ariadne appears as a DLC exclusive persona in Persona 5. She retains her SP Skill Attack from Persona 4 Arena, Weaver's Art: Beast (shortened to "Beast Weaver" to fit the name in the ability list) as her signature ability. When this ability is used the protagonist will shout either "Blastoff!", the same line Labrys would say on activating the move in P4A, or "It's educational guidance!", the same quote Labrys would make when she was selected on the character select screen.

It is advised for the player to purchase Ariadne after they advance rank 6 of the Strength Arcana Confidant, as otherwise it will prevent obtaining the required Lachesis using Ame no Uzume, forcing them to fuse a Clotho and a Regent instead.

Itemizing Ariadne will result in the unique accessory, Red Yarn Ball, which increases luck by 10 while also providing Auto-Tarukaja. 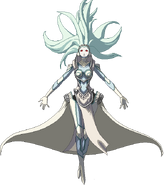 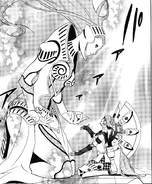 Ariadne as she appears in the Arena Manga. 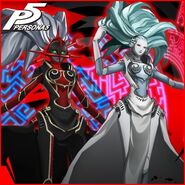 Ariadne as she appears in Persona 5

Yoshiko Tsushima in her Ariadne outfit