Amanda Winn Lee
"It's the only way."
—Victory in human form

Argilla is one of the player characters in the Digital Devil Saga duology.

She had issues with devouring others at the beginning of Digital Devil Saga; the horror of having to eat corpses she had slain herself initially forced her to refuse to eat her kills, influenced by Harley's sheer terror of the carnage at Ground Zero and his eventual death. However, by the time she emerges into the real world she has accepted it as a necessary evil, and looks down on those who take their lives for granted, such as Roland. What's more, she has developed a flirtatious nature with her friends, especially Serph.

She is more emotional and optimistic than some of her comrades, convincing Jinana of the possibility of a better world without having to fight. However, certain people, like Bat, who betrayed his tribe and devoured Jinana, were seen by her as monsters she had no issues with killing. She also initially despised Roland for his policy of inaction, until she understood his motives not to confront the Karma Society. 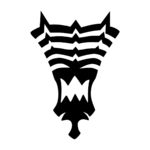 The Embryon's master sniper. Argilla can change into Prithivi, as shown by the "Seismic Wave" Atma on her chest. As a human, her weapon is a sniper rifle. As Prithivi, she is strong against earth attacks but weak against force attacks. She has superior Magic power at the cost of Strength and Vitality.

She awakens to her Atma as she advances on the Svadhisthana fortress of the enemy tribe, the Vanguards. She reacts with fear to Harley's hysterical horror of her and the other members of her tribe as they advance throughout Svadhisthana's halls. Eventually, that fear reaches a pitch level when Harley, driven to insanity by Heat's interrogation and his own memory of the atrocities wrought upon his men by the release of Atma, becomes Hayagriva and attempts to kill them.

Despite Harley's defeat, Argilla refuses to eat her slain victims and outright feels disgusted by the notion of doing so, even though she is physically exhausted and ravenously hungry by following said belief. Upon the revelation that the girl found in the remains of the blast that released the Atma upon the Junkyard, Sera, could sing a song capable of lessening the corruptive effects of Atma upon infectees, she regained a sense of hope, and decided that killing herself out of hunger would not change things. Reluctantly, she began consuming her enemies so that she would not be helpless to protect Sera.

She received the news of the proposed alliance with Jinana of the Maribel with caution, urging Serph not to engage in pointless combat. When meeting with Jinana, she asked not to be put through her "gauntlet," intended to discover whether the Embryon would make good allies, and helped her acknowledge her sadness at the massive loss of life due to infighting in the Maribel. At the end of Jinana's test, she asked Heat not to devour Bat, reiterating her wish not to become a mindless killing beast. Touched by this, Jinana accepted the proposal.

Argilla would later participate in the stealth mission against Mick the Slug, leader of the Solids, in his base of Anahata. However, she was ambushed in Mick's bedroom, and discovered that Bat had betrayed the Maribel for the Solids by going to Mick and giving away the mission. Infuriated, she tried to return with her tribesmen to Manipura, but they found a frenzied Jinana upon Anahata's doors. Much to her horror, they were forced to kill her in self-defense. In her final moments, Jinana acknowledged she felt a kinship with the Embryon, accepted by Argilla as a comrade as she died, even though she had revealed Sera's existence and powers in an effort to convince her to survive. Argilla would carry a grudge against Bat long afterwards.

She was trapped in Manipura by the remains of the Solids' task force, and was forced to confront Bat again. She was outraged he had not only devoured Jinana's corpse, but had led them into a trap as to capture Sera for the Solids, having overheard Argilla's confession to Jinana. Furiously reverting to human form, she inadvertently allowed Bat's Camazotz form to escape Manipura.

Later, disguised as Sera, she was used as bait for Bat and the Brutes at the Deserted Ship. While she fought well, neither she nor Bat were able to kill each other. However, she would have her revenge as the wounded Bat was left inside the Ship to be blasted to smithereens when the trap was sprung. While she received some closure for Jinana's death and Bat's denouncement of the fact she herself had killed so many, she would retain some of the guilt and use it for constructive purposes.

She was also present in the battle against Harihara on the final floors of the Karma Temple, and was one of the few survivors of the Junkyard's destruction.

Awakening in "Nirvana," she found that it was actually a decaying world, with a Black Sun shining down a destroyed civilization. She was pitted against the forces of the Karma Society when she learned they were using innocent, "unworthy" humans, as food for their own Atma infectees. She joined Serph and Gale in their quest to find the survivors of their tribe, eventually meeting the failed leader of the Lokapala resistance, Roland.

Argilla despised Roland at first, as he espoused the philosophy to keep hiding for as long as possible instead of taking any direct action against the Society. She warmed to him as she understood his motives and he revealed he had infected himself with the Atma Virus in order to better fight the forces of the Society.

She eventually sacrifices herself to help Roland defeat Meganada — this shows that she has accepted him as a comrade. Her data ascends to the sun, where she is reunited with Seraph and fights one last battle with them, reaching the Sun's core to contact God and beg for the restoration of the planet. Depending on a dialog choice made in Digital Devil Saga, she may inherit the signature move of her fallen comrade Jinana, Seraph Lore which reduces all enemy's HP by 80%. Unlike the similar skill Mahamaon, it cannot miss an enemy if it has no resistance to Expel. After the final fight with Brahman, she doesn't reach enlightenment, so she is reincarnated along with the rest of the Embryon.

Argilla has gravity-based powers instead of earth-based ones.

Argilla was based upon one of the nurses working in the Karma Society's God Project. Said nurse, simply addressed as "Real Argilla" in the game, was involved with Serph Sheffield, and agreed to spy on Heat O'Brien. She was involved in the disastrous shooting that led to the Black Sun phenomenon and died when Sheffield became the monstrous Real Varuna.

Her Solar Data is found in the second game, in the Sun. She tries to defend herself rather clumsily. 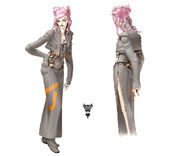 Argilla and Prithivi as they appear in Digital Devil Saga: Avatar Tuner

Argilla and Prithivi as they appear in Digital Devil Saga: Avatar Tuner

Argilla is a Latin word borrowed from the Ancient Greek word "ἄργιλλος" (árgillos) and lent to the English word "argil." They all mean "white/potter's clay."