Ares is a demon in the series.

Ares is the god of war, conflict and blood-lust in Greek mythology. He is one of the twelve Olympians and the son of Zeus and Hera. In Greek literature, he often represents the physical or violent and untamed aspect of war, in contrast to the armored Athena, whose functions as a goddess of intelligence include military strategy and generalship.

The Greeks were ambivalent toward Ares: although he embodied the physical valor necessary for success in war, he was a dangerous force, "overwhelming, insatiable in battle, destructive, and man-slaughtering." His twin sons Phobos and Deimos and his lover, or sister, Enyo accompanied him on his war chariot. In the Iliad, his father Zeus tells him that he is the god most hateful to him.

Ares was most often characterized as a coward in spite of his connection to war; he responded to even the slightest injury with outrage. He is well known as the lover of Aphrodite, the goddess of love and beauty, who was married to Hephaestus, god of craftsmanship.

Ares' main attribute was a peaked warrior's helm. Even in domestic scenes, such as feasts of the gods, he was depicted either wearing or holding his helm. An association with Ares endows places and objects with a savage, dangerous, or militarized quality. Ares also had numerous mortal (or divine) offspring. Many of these inherited their father's violent temperament and in myth were often cast in the role of villains. In one myth, he created the Amazons.

Ares is also the counterpart of the Roman god, Mars. Ares, like Mars and Nergal, is a deity associated with the planet Mars.

Ares can only be encountered through a series of quests. Players must give a Jack Ripper card to the Jack Frost NPC in Third Home after having completed the Stray Frost quest. He gives the player an EV-GL floor card. Players can clear this floor by defeating the Coatlicue mini-boss and inputting the password 401 on the next floor. When players defeat the Lamia on the final floor, they're given a valuable item.

This valuable item triggers a conversation with the Artemis NPC in Shinagawa's bronze-level Catacombs during the New Moon period. This NPC gives the EV-GA card in exchange for Gift Melon for Reapers. This floor opens with a fight with Pallas Athena that can only be passed by applying Ambrosia. The following floor contains a timed fight with Ares and three Furiae. By clearing this floor on time and correctly, players are able to fuse him in a special double-fusion of Artemis and Typhon.

Ares appears in the Challenge Quest The Cursed Gauntlet, where he refuses to leave the gauntlet that belongs to his dead master and will only leave if someone stronger than him beats him in combat. He starts a battle with Flynn and states he will hand over the gauntlet if he is stronger than him. He admits defeat after losing to Flynn and leaves the machine, hoping the next time he meets Flynn it will be as allies.

"The god of war in Greek lore.
Other gods hated him for his cruel and violent nature. He opposed Athena, who represented strategic warfare."
—Shin Megami Tensei IV Apocalypse compendium

Ares can teach Nanashi the Power Punch, Charge and Javelin Rain skills through his Demon Whisper. He benefits from learning Physical and support skills.

"The god of war in Greek myth. Other gods despised him for his cruel and violent nature. Opposed Athena, who represented strategic warfare."
—Persona 4 compendium

Ares can be obtained through Shuffle Time in Marukyu Striptease.

"The mightiest of warlords among demons. A true leader who's decisive in battle."
—Demonary, DemiKids

Ares can perform the combos Dragon Cross with Armasnak and Firetung. He also has the power Anti-Dragon.

Ares is a common enemy on the hostile floors of the Karma Society Tower, appearing prominently on floor 11.

"The god of war in Greek mythology, and one of the twelve Olympians. Aries is notorious for his temper and cruelty, often being shunned by the other gods. In contrast, the Olympian goddess of war and wisdom Athena is held in a higher regard. Other than Apollo, he is arguably the most aesthetically pleasing to behold."
—Shin Megami Tensei: Liberation Dx2 compendium 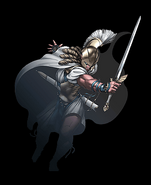 Ares in Persona Q: Shadow of the Labyrinth
Community content is available under CC-BY-SA unless otherwise noted.
Advertisement