Ardha, also known as Ardhanari, Alder or Ardhanarishvara, is a demon in the series.

The term "Ardhanarishvara" is a combination of three words- "ardha," "nari" and "ishvara," meaning respectively, "half," "woman" and "lord" or "god," that is, Ardhanarishvara is the Lord Who is Half Woman. The god is male on one side and female on the other, depicted with the male half bearing aspects of Shiva and the female half bearing aspects of Parvati. It is one of the most common forms of the divine in Indian art and the figure itself is likely older than the many stories and myths that have formed around it. In some texts, Ardhanarishvara is an androgynous incarnation of Shiva, in others it is the form of Shiva and Parvati, who loved each other so deeply that they joined as one being rather than stay apart.

Ardhanarishvara can be created through a special fusion of Shiva and Parvati.

Ardha is not personally in the game, but is represented instead as a fusion spell of the same name (as Ardhanari) using Shiva and Parvati. Upon execution, the Ardha fusion spell inflicts severe Fire damage upon all enemies.

This game marks the first appearance of a 3D model for Ardha based on their Shin Megami Tensei II design.

Ardha is one of the Personas used by Margaret.

"A dual-gendered god whose appearance is half that of the destroyer Shiva and half his wife, Parvati. Ardha is the ideal figure of Shaktism, the perfect god."
—Persona Q: Shadow of the Labyrinth compendium

Ardha can only be created through special fusion, by combining Shiva and Parvati.

"A god of dual gender whose appearance is half that of the destroyer, Shiva, and half his wife, Parvati. Ardha is the ideal figure of Shaktism, the perfect god."
—Persona 5 background

Ardha is the ultimate Persona of the Temperance Arcana and can only be obtained through fusion in the Velvet Room once the Temperance Confidant with Sadayo Kawakami has been completed. Ardha is summoned through a special fusion combination of Shiva and Parvati. Ardha is one of four Personas to learn God's Hand and the first of two to learn the Cosmic Flare skill. Ardha is also one of the three Personas to learn the Invigorate 3 skill and is also a source of the Agneyastra skill, as well as the Auto-Masuku passive skill. They are one of the four Personas to learn Fortified Moxy and Salvation. When itemized through Electric Chair execution, Ardha yields an Agneyastra skill card.

When fighting Caroline and Justine, failing to do enough damage to them will cause them to summon Ardha for a special attack that will activate their All Out Attack.

Ardha is can be itemized into Sahasrara, the strongest firearm available for Sumire Yoshizawa, which provides a +5 bonus to all stats. During a fusion alarm, Ardha instead becomes Sahasrara II, with a slightly higher damage value and 1 extra point to all stats.

Ardha is the Atma Avatar of Seraph. Just as Seraph is a being composed of the combined data of Serph and Sera, Ardha holds the perfect balance of masculine and feminine energies. It has no elemental weaknesses or resistances. The manifestation of Seraph is likely another reference to Ardha, as Seraph is created when Sera and Serph are immolated in their attempt to reach the Sun, similar to how the god Ardhanarishvara was created after the rebirth of Parvati, who in her previous life died of self-immolation and joined with Shiva when reincarnated.

Ardha inherits the Mantra boards of both Serph and Sera, along with their mastered skills. While Seraph's personality is similar to Sera's, Ardha's stats can be freely customized, leading to a well-balanced character. Depending on Serph's decisions towards Margot Cuvier's plans of creating a world of Tuners earlier, Ardha may also inherit Hari-Hara's special skill from Digital Devil Saga: Avatar Tuner, Reincarnation, which deals massive Almighty damage to all enemies and costs 99 MP.

In a second cycle save, Serph will inherit the Mantra board and the mastered skills of Ardha, but none of Ardha's elemental affinities, nor Reincarnation, which must be acquired the same way in every playthrough.

In Quantum Devil Saga- Avatar Tuner, Ardha is instead the Atma form of Shin Minase, while Seraph (the character) does not exist, replaced by Serph eating both Heat and Sera. It's shown to have the power to inhibit the AIs, completely shrug off their magic attacks and create tendrils of light which crystallize enemies.

Ardha in Persona O.A. (No Background) 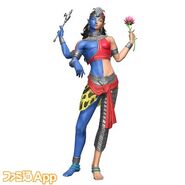