Archangel is a demon in the series.

In the nine orders of angels in Christian teachings, the archangels are among the eighth, making them second in the third hierarchy. Archangels are one of the few bodies of angels that contact those on the material plane directly and are the ministers and messengers between God and mankind. There is a dispute on whether famous archangels such as Michael and Gabriel are the same class as the "plain" archangels, who in the Kabbalah and in the Bible are called "Beni Elohim" (meaning "children of God"), or belong to a completely different order known as "Rav-Malakhim" or "Malakhim-Panav," who are the angels that stand before the lord himself.

According to some texts, archangels are also the primary warrior race of angels and are known to be at constant war with the fallen angels. It is even suggested that Lucifer was an archangel before his fall from grace.

"Origin: Israel. They are the second lowest of the angels. The four heralds were originally depicted as being of this rank. However, they rose in the hierarchy for their feats in battling the fallen angels. They are the general staff of God's army, and mediators between God and humans."
—Shin Megami Tensei A-Mode DDS dictionary

"The eighth class of angels, members of the Third Sphere, they are directly involved in the world of humans as the bearers of God's will, acting as a bridge between humans and their Lord. At the end of the world, they will be charged with the blowing the Seven Horns.
Archangels have a spiritual awareness two levels higher than humans. Unlike angels, their role is to guide groups and nations rather than individuals."
—Shin Megami Tensei IMAGINE compendium

Archangels can be contracted on Shinagawa field and can be encountered regularly in the Celu Tower instance. They appear as mobs supporting various Divine and Seraph bosses, as well as Hathor when she appears as the boss of Celu's bronze instance.

Archangel is one of the law-specific bazaar tending demons that can only be used in Arcadia.

Archangel can first be encountered in the overworld areas surrounding Kabukicho Prison.

"Eighth of the nine orders of angels. Their duty is to minister to humans and deliver messages.

They are warriors of Heaven and lead Heaven's forces during battle with the armies of evil."

Archangel can be evolved from an Angel once she reaches level 12. He can teach Flynn the Hama, Heat Wave, and Tarukaja skills through his Demon Whisper. Archangel is used in the special fusion to summon High Pixie in the Cathedral of Shadows. Upon reaching level 22, Archangel can evolve into Principality.

A Principality and Archangel guard an item needed to undo the first of the seals within Kanda-no-yashiro under orders from Merkabah. After warning Nanashi and Asahi to leave, they will attack should the two choose to remain. Defeating the pair will yield the Mallet Crest.

"Israeli angels known for carrying out the Divine Will. There are many theories about the role of archangels, but as they're strong members of Heaven's hierarchy, the general theory is that their role is to convey the Divine Will to humans. It is said they command nine armies of angels who fight against the army of demons that tries to guide humans down to hell. In ancient times, the archangels were considered the top of the divine hierarchy, but in the Middle Ages other classes above the archangels were born, such as Seraphims and Virtues, which knocked them down the list."
—Persona World

"Eight of the nine order of angels, their duty is to humans and deliver messages. They are at constant war with the fallen angels."
—Persona Q: Shadow of the Labyrinth compendium

"Eighth of the nine orders of angels. Their duty is to minister to humans and deliver messages. They are warriors of Heaven and lead Heaven's forces during battle with the armies of evil."
—Persona 5 background

Archangel is first encountered as a mid-boss in the chapel area of Kamoshida's Palace, and then will appear in the latter areas of the Palace as a strong Shadow. Archangel will not reappear in Mementos, so he must be acquired in Kamoshida's Palace or summoned through fusion.

Archangel can be obtained by rank fusing Seraph ten times.

"A champion of champions and a natural-born leader with the heart of an angel."
—Demonary, DemiKids

Known as Guardian, he can perform the combos Holy Song with Doom Cat and Holy Shield with Vomana. Guardian can be fought in the Old Tower in Light Version and the Deep Hole in Dark Version. There is a rare chance of encountering a shiny Guardian, and beating the Tournament version of BattleNet has a spawn of obtaining one.

Archangels begin appearing on the 11th floor of the Karma Society Tower. They may appear alone, in a group of 3, or alongside Setanta.

"Eighth of the nine orders of angels. As their name indicates they were higher in the hierarchical order but over time fell through the ranks. Their duty is to minister to humans and deliver messages. They are also the warriors of Heaven and lead Heaven's forces during times of battle."
—Shin Megami Tensei: Liberation Dx2 compendium

Archangels alongside Powers and Demi-fiend in the promotional artwork of Shin Megami Tensei III: Nocturne

Archangel as he appears in Shin Megami Tensei III: Nocturne. 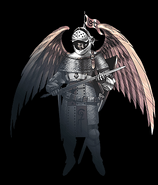 Archangel as it appears in Persona 3 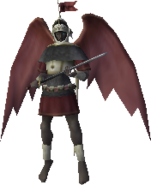 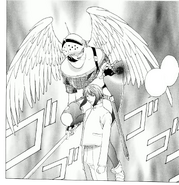 Archangel as it appears in Persona: Tsumi to Batsu

Archangel appears in Persona 5: The Animation 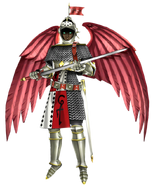 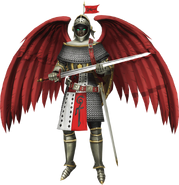 Archangel in Shin Megami Tensei: Liberation Dx2
Add a photo to this gallery

Retrieved from "https://megamitensei.fandom.com/wiki/Archangel?oldid=394473"
Community content is available under CC-BY-SA unless otherwise noted.