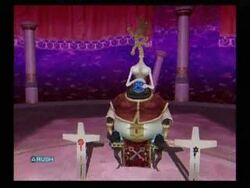 The Hierophant (ハイエロファント, Haierofanto)? is one of two Shadows that appears during the fourth Full Moon Operation (July 7th) in Persona 3. After its defeat, Arcana Lovers is eventually fought.

The Hierophant appears in a love hotel within the infamous red-light district known as Shirakawa Boulevard. Its appearance is rather startling; an extremely obese man sits upon a small throne, the Hierophant Arcana mask on its face. Behind him, sprouting from the small throne is what appears to be a woman, entirely beige, and with a flailing head shaped like six-barred cross. On either side of the throne are figures resembling people that shake constantly. When attacking, the obese man and the beige woman laugh in synchrony. The obese figure is wearing what appears to be papal clothing with a portion of it drooping down to show the Keys of Heaven. The throne's legs are literally legs wearing leggings and red high heels. Two cross shaped figures stand at both sides.

It is likely that that Hierophant could also represent bending the rules, as the womanly figure coming out from the chair whose head is a bent cross. The rules that are being bent are vows, like a being a priest swearing celibacy and chastity or a married couple vowed to be with each other only. The seated figure is obese, likely representing indulgence, being of a sexual nature -- as represented by the fishnet wearing legs sprouting from the chair.