Arcana Fortune (フォーチュン, Foochun)? is a full moon boss in Persona 3 and is fought alongside Arcana Strength during the seventh Full Moon Operation on October 4.

When the battle begins, Arcana Strength casts a shield on Fortune, protecting it until Strength is defeated. Throughout the battle, Arcana Fortune can create a large roulette wheel. The wheel can cause damage, alter stats, inflict status problems or heal either the protagonist's team or the two Arcana depending on which panel the pointer lands on (red benefits the enemy and blue benefits the party). The easiest way to get a result that benefits the team would be to stop the roulette when the result pointer is directly opposite of the desired panel. Additionally, one result on Fortune's wheel inflicts Fear on itself or Strength (if the latter is not defeated yet), leaving them vulnerable to Ghastly Wail.

Once Arcana Strength falls, Arcana Fortune is open to attacks. At this time, it also unveils more abilities to try and defeat the members of SEES, using multi-hit Pierce-type attacks and high-level Wind spells. Wheel of Fortune remains its main attack, but it begins skewing the odds in its favor as its health drops, having less blue panels and larger red panels to increase the odds of the party hitting a negative effect. It also uses damage-related roulettes more frequently, but if a status ailment wheel comes up, it is vulnerable to the same Fear-Ghastly Wail combo that can be used against Strength.

As with all the shadows who are fought during the Full Moon, it represents the inverse of its respective tarot card. The Fortune Arcana appears as a sphinx, one of the creatures depicted on the Rider-Waite Wheel of Fortune card. It also resembles the lion often seen in depictions of the Strength Arcana (echoing its role as Arcana Strength's partner in battle). It bears the green and red mask of a Fortune shadow, and its Wheel of Fortune summons a roulette similar to the cards' classic depiction of Fortune.

In tarot, the Fortune card teaches patience in order to achieve greater gains and changes, while the reversed card represents quick resolutions by any means necessary. The shadow uses a roulette in order to cause damage, yet it might turn against her, this is due to its neutral nature, entering in conflict against the shadow's lack of patience driving her to even cheat against the player when in disadvantage. 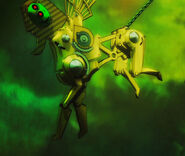 Arcana Fortune in Persona 3 The Movie

Arcana Strength and Arcana Fortune in Persona 3 The Movie

The Wheel of Fortune in Persona 3 The Movie
Community content is available under CC-BY-SA unless otherwise noted.
Advertisement