The Arcana Empress is one of two Shadows that appears during the third Full Moon Operation (June 8th) alongside Arcana Emperor in Persona 3.

During the third Full Moon (June 8), SEES decides to try and rescue Fuuka by standing inside the Gekkoukan High School gymnasium (where Fuuka originally went missing) until the Dark Hour arrives, thus winding up where she would have had she truly experienced the Dark Hour. Upon trying this method, however, the team is separated. The protagonist finds Junpei and Akihiko not long after their separation, and Fuuka shortly after that. During their return trip, Akihiko realizes that the Arcana Magician and Arcana Priestess appeared during full moons, and, when Mitsuru radios in reporting Shadows, realizes this is no coincidence and that Mitsuru and Yukari, who stayed behind as backup, are in serious danger.

When these four arrive back at the first floor of Tartarus, they find that the Arcana Empress and Emperor have attacked Mitsuru and Yukari. The girls have been defeated by the Shadows because Paradigm Shift has prevented them from exploiting a consistent weakness. As Natsuki wanders into the scene and apologizes to Fuuka, the girl takes the Evoker and summons Lucia. Junpei, Akihiko, and the protagonist engage the Empress and Emperor in battle.

The Empress is a large, pot-bellied Shadow that resembles a turkey/peacock with a staff, a blue dress and a green cloak. She is weak against Slash, Pierce, and Strike attacks but resists all manner of magic, the opposite of the Emperor. However, she can change it with "Paradigm Shift" just like the Emperor next to her. Just like all bosses in the game, she is constantly immune to light or darkness attacks.

The battle with the Empress and Emperor serve to demonstrate Fuuka's scanning abilities. Be sure to scan them after every time Paradigm Shift is used to determine the new weakness(es) and resistance(s).

As all Shadows appearing on Full Moon nights, its appearance and behavior are based on Tarot cards from the Major Arcana in the reverse position. The Arcana Empress carries a golden crown shaped mask as all Shadows from the Empress Arcana. She wields a royal scepter.

She represents the spiritual side of the soul, thus she starts the fight being weak to physical attacks.

The Arcana Empress and Arcana Emperor both are responsible for the things that happened to Natsuki and her friends after they bullied Fuuka. As if a punishment for not caring about her. Natsuki's regrets for the things she did are what awakens the power in Fuuka to save everyone.

Also worthy to note, at the school entrance we can see a blue scepter and a red sword which are used by both Arcanas during this battle which takes place at the entrance of Tartarus. Also after the events of this mission, Natsuki becomes Fuuka's friend and starts to care for her and want to comfort her, which does reflect the teachings of the Empress card.

Arcana Empress as she appears in the Persona 3 manga

Arcana Empress being attacked by Polydeuces 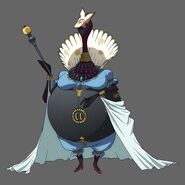 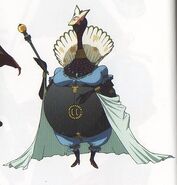 Arcana Empress in Persona 3 The Movie
Community content is available under CC-BY-SA unless otherwise noted.
Advertisement