The Arcana Emperor is one of two Shadows that appears during the third Full Moon Operation (June 8th) alongside Arcana Empress in Persona 3.

During the third Full Moon Operation (June 8), the Arcana Empress and the Arcana Emperor are the two Shadows that attack Yukari and Mitsuru. By the time Akihiko, Junpei, and the protagonist or female protagonist return to the first floor of Tartarus with Fuuka, the girls have been defeated because they haven't been able to exploit a consistent weakness. Fortunately, Fuuka's Persona, Lucia, turns out to be able to sense Shadow weaknesses, allowing Akihiko, Junpei, and the protagonist to fight the Shadows. The Arcana Emperor is a tall Shadow that carries a rather small sword. On its torso is a large red cross, and its arms are long and almost floppy, with small tassels at the end of its "sleeves". It has no neck or head, only a floating Emperor mask, identifiable by its signature purple color and spiked top.

The battle with the Empress and Emperor serve to demonstrate Fuuka's scanning abilities. Be sure to scan them after every time Paradigm Shift is used to determine the new weakness(es) and resistance(s).

As all Shadows appearing on Full Moon nights, its appearance and behavior are based on Tarot cards from the Major Arcana in the reverse position. It has the appearance of a large entity covered in armor fitted for a knight, it has a large chest with a large cross imprinted on it and a short sword, the emperor mask replaces his head.

As this is the Reversed version of the Emperor Arcana, it represents the dark qualities of the Arcana. The Emperor represents authority, the strong will of a king and the masculine side of the two genders, the Reverse version however is represented as weak willed, corrupt and rigid. This is represented by the fact the Arcana Emperor has a large chest and fights alongside the Arcana Empress — it gloats of its power and superiority, yet it cannot fight without help. The small sword it uses also represents the weak will of someone irresponsible or one who doesn't make the right decisions as a leader. All of its movements are also very stiff, as if it forces every action out.

Arcana Emperor as he appears in the Persona 3 manga 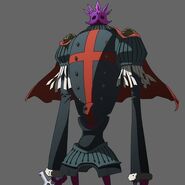 Arcana Emperor in Persona 3 The Movie

Arcana Emperor in Persona 3 The Movie
Community content is available under CC-BY-SA unless otherwise noted.
Advertisement