Arcana Chariot is the fifth Full Moon Operation (August 6th) in Persona 3. It appears as a boss in a secret underground military base along with Arcana Justice.

When first encountered, the Shadows appear as a single entity, having possessed a tank for use as armor and extra firepower. After a few turns in battle, however, the duo will separate into their individual selves to increase their offensive. In this state, Chariot is revealed to be the main hull of the tank, with the yellow mask of the Chariot Shadows displayed on its underside. When separated from Justice, it adopts a humanoid posture, "standing" on its rear treads.

The Chariot and Justice Shadows are initially fought as a single entity with 3000 HP, but after enough damage is done, they split apart, with half its remaining HP given to each part. If the party defeats one of the Shadows while leaving the other alive, the other will simply cast Samarecarm to revive the fallen one with full health. Thus, the party is forced to defeat them both quickly or with one attack; it is impossible to defeat the Shadows in their combined form. If their fused form is reduced to 1 HP, it will become immune to all further damage until its next turn, after which it will automatically separate into its components, who will each have 1 HP.

The Chariot Shadow mainly utilizes Strike attacks as its main form of attack, occasionally boosting them with Power Charge. It is also capable of inflicting status ailments to force the party to lose turns.

As with all Shadow Arcanas, the Chariot Shadow is the inverse version of the Chariot, which represents victory and conquest. In this case, it is literally military conquest and victory at all costs. It represents impulsiveness, inflexibility, and anxiety; likewise, a tank is seen to be very difficult to control. The Arcana Justice acts as a "Driver", leading it around so it can achieve victory over others.

Arcana Chariot and Justice together and apart 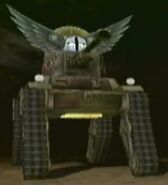 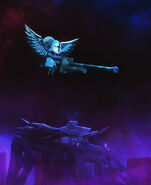