Reverse
"I am thou... Thou art I... From the sea of thy soul I cometh... Ruler of the blazing sun and blue skies, Apollo..."
—Apollo, Persona 2: Innocent Sin

Apollo is a demon in the series.

Apollo, also known as Apollon, is one of the twelve Olympians in both Greek and Roman mythology. He was originally associated with arts, such as music and poetry, but was later transfigured into the god of the sun, overshadowing Helios. He is the son of Zeus, the king of gods, and Leto, the Titanides of motherhood. He is also the twin brother of Artemis. After his birth, the jealous Hera sent the deadly serpent, Python, to assassinate his mother, but the infant Apollo, equipped with a bow and arrows lent by Hephaetsus, successfully killed the creature before it could cause any harm.

While reaching adulthood, Hermes gave him the first lyre (which he later gave to his son or ward, Orpheus, who "mastered" the lyre) in exchange for the caduceus, and Apollo became the master of musical instruments. Many mortals and even gods challenged him in a musical contest, but their skills were no match for his. While appearing in many tales, he had numerous lovers, females and males, many who often met tragic fates or had terrible lives. Among others are Daphne, Cassandra and Hyacinthus. Aside from arts, Apollo is also considered as the god of archery, prophecy and medicine, while at the same time, serves as the leader of the Muses.

Apollo is one of the demons exclusive to the updated version of Megami Tensei II. His stats and skills resemble Ahura Mazda's.

Apollo appears as Tatsuya Suou's ultimate Persona in Persona 2: Innocent Sin, once the Red Eagle Mask is successfully collected. He excels at Fire and Nuclear-based spells and is immune against those elements, including the elements Light and Dark. The skill Nova Kaiser can be chained to perform the Grand Cross Fusion Spell along with the other main characters' Personas. His main weaknesses are water and ice.

"I can sense it... You and your other you. I'm your shadow... Though visible, I cannot be dismissed. However..."
—Shadow Tatsuya
"I can. The sun is irreplaceable because it is singular... I shall incinerate you with my dark flame, and make the power of light mine!"
—Reverse Apollo, Persona 2: Innocent Sin

When the party reaches the end of the Leo Temple, they encounter Tatsuya's Shadow Self who wields this Persona. If Tatsuya is equipped with Apollo, after Shadow Tatsuya is defeated it will merge with its Reverse, gaining immunity to Nuclear and Darkness.

Apollo returns as Tatsuya Suou's ultimate Persona in Eternal Punishment. Following the events from Innocent Sin, as Tatsuya is the only one who retained the memories created in Innocent Sin, he is able to retain Apollo as his Persona and starts out with Apollo upon joining the party. His appearance is slightly altered and his combat skills remain the same, except that his immunity against Darkess is absent and his Mutation skill is upgraded from Freidyne to Heat Kaiser. He's still able to perform fusion spells, such as the Dragon Cross together with other main characters' Personas.

If the player has save information from Innocent Sin, and they have this Persona, its stats will be transferred over. However, this was cut from the US version, since for PSX only Eternal Punishment was localized, and for PSP only Innocent Sin was localized.

Apollo as he appears in the Persona 2 duology 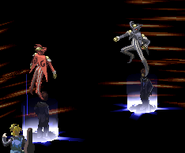