Anzu is a demon in the series.

Anzu, also known as Zu, Anzud or Imdugud, was a demonic tempest bird in Mesopotamian mythology.

In his most famous mythical role, Anzu steals the Tablets of Destinies from Enlil, the lord of the wind. These objects gave the power to control fate to whoever possessed them, which in Mesopotamian mythology amounted to being able to control the universe. The supreme god Anu promised sovereignty over the gods to whoever recovered the tablets from Anzu. Due to the surviving texts being in fragments, it's unclear to establish the outcome, but it seems Ninurta, Enlil's son, recovered the Tablets. In at least some accounts he was tricked by Enki afterwards, which seemingly prevented him from becoming the ruler of the gods. In some versions, Ninurta's deeds were instead ascribed to Marduk.

The myth Gilgamesh, Enkidu and the nether world mentions Anzu as one of the monsters infesting a tree planted by Inanna. She enlists the aid of the eponymous heroes to get rid of it.

A more benign version of Anzu appears in a myth about Gilgamesh's father, Lugalbanda. The creature rewards him with the ability to travel at supernatural speed to reward him for taking care of an Anzu chick he found.

Anzu appears in the permanent event instance B11F of the docks in Shinjuku Babel, acting as one of the three demons fighting over the Tablets of Destiny. Players can obtain the ability to fuse him by defeating his miniboss form and collecting the Aged Sacred Feather it drops. It also appears frequently within the Ueno Mirage instance.

Anzu is a special double-fusion of Basilisk and Cerberus.

Anzu can be found in the initial areas of Blasted Tokyo and within Pluto Castle. He can teach Flynn the Zionga, Nihil Claw and Me Patra skills through his Demon Whisper.

Anzu can be found in Minami Sunamachi. He can teach Nanashi the Shock, Nihil Claw, Me Patra and Critical Eye skills through his Demon Whisper. Anzu benefits from learning Physical, Electricity, healing and support skills.

A large statue of Anzu can be found in the area of Shiba reached through Akabanebashi, absorbing the power from it will strengthen the protagonist's demons.

"An evil deity of Mesopotamian folklore also known as Zu. It has an eagle's body and a lion's head. Fueled by his desire to rule over all, Anzu stole the Tablets of Destiny from the sky god Enlil."
—Devil Summoner: Raidou Kuzunoha vs. The Soulless Army devil chart

Anzu is first encountered in the Dark Realm of Harumi-Cho while Raidou is investigating the missing cargo shipments to Konnou-Ya and trying to track down Rasputin. Upon entering the Dark Realm, Raidou will have to save the missing sailors from groups of Anzu demons that have set upon them to kill them.

"An evil deity of Mesopotamian folklore with an eagle's body and a lion's head. While the god Enlil purified himself, Anzu stole the Tablets of Destimy from him."
—Persona Q compendium

"An evil deity of Mesopotamian folklore with an eagle's body and lion's head. While the god of Enlil purified himself, Anzu stole the Tablets of Destiny from him."
—Persona 5 background

Anzu is the fourth Persona of the Hierophant Arcana and can be found as a Shadow in Futaba's Palace and in the Akzeriyyuth area of Mementos, with the title "Thief of Tablets." He is the first Persona to learn the Masukukaja skill and one of three Personas to learn the Wind Break skill. Anzu is the only Persona to learn the Null Forget skill. When itemized using Electric Chair execution in the Velvet Room, Anzu will yield the Dekaja skill card.

Anzu is needed to fuse a Neko Shogun with the Dekaja skill in order to complete a Strength Confidant request for Caroline and Justine. By leveling up Anzu until it learns Dekaja, it can then easily pass the skill to Neko Shogun through a simple advanced fusion.

The Shadow Self of Tsukasa manifests as Anzu. While Tsukasa is an antagonizing character from Makoto Niijima's Confidant, he is not a Mementos Target in the game itself.

Known as War Lion, he can perform the combo Ice Wing with Apsaras. War Lion also has the power Mood-burst.

"An evil deity of Mesopotamian lore with an eagle's body and a lion's head.
While the god Enlil purified himself, Anzu stole the Tablets of Destiny from him."
—Devil Survivor 2 compendium 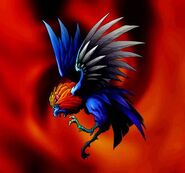 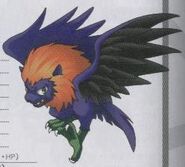 Anzu as it appears in Shin Megami Tensei IMAGINE

Anzu in Devil Summoner: Raidou Kuzunoha vs. The Soulless Army

Anzu as it appears in Card Summoner

Anzu as it appears in Devil Survivor 2

Anzu as he appears in Raidou Kuzunoha vs. The Lone Marebito

Anzu in Persona 5 The Animation

A Demon Statue of Anzu in Shin Megami Tensei V