Bearer of the Scales (P5)

Anubis is a demon in the series.

Anubis is widely known as the Egyptian deity of mummification. In this role, he oversees the mummification process of the dead, and is usually seen in hieroglyphic tomb-carvings as overseeing the burial ritual for the pharaohs and those of royal lineage; this is due to the priest involved wearing the masks of Anubis to symbolize him as the overseer of the ritual.

His place as a judge comes from the ancient Egyptian belief that those passing into the afterlife were judged by him using a scale to see if the deceased's heart (lightened by good works or weighed down by sins) was as light as a feather. Should the heart be heavier than the feather, the heart would be eaten by Ammut, and the person undergoing judgement was not allowed to continue their voyage towards Osiris and immortality.

Anubis appears alongside the Seth boss in the alternate Shinjuku Babel's Abyss Tower instance. He later serves as the boss of the temporary Ordeal of Soul event instance. Through fighting him, players were able to obtain his plugin, enabling them to use the special double fusion of Thoth and Narasimha to create him.

Anubis can teach Nanashi the Judgment Light, Mamudoon and Dekunda skills through his Demon Whisper. He benefits from learning Light, Darkness and healing skills.

"A jackal-headed god of Egyptian lore. He weighs the hearts of the dead to determine their final destination. He is also associated with mummification."
—Devil Summoner: Soul Hackers 3DS compendium

"The jackal-headed god of Egyptian myth. He weighs the hearts of the dead to determine their final destination. He is also associated with embalming."
—Persona 3 compendium

"The jackal-headed god of the dead and embalming from Egyptian myth. He weighs the hearts of the dead to determine their final destination."
—Persona 5 background

Anubis is the first Persona of the Judgement Arcana and appears as a Shadow in Futaba's Palace and the Akzeriyyuth area of Mementos, with the title "Bearer of the Scales." He is the first Persona to learn Hamaon and is the only source of the Null Fear and Resist Bless skills. When itemized through Electric Chair execution in the Velvet Room, Anubis yields a Makouha skill card. Anubus is required to perform an advanced fusion to produce both Seth and Lucifer.

"A demon with a jackal's head that serves as judge and jury over those in the afterlife."
—Demonary, DemiKids

Anubis can perform the combo Pyramid with Horus or Isis and Stun Claw with Teskarot. Anubis also has the power Male Ego.

"The jackal-headed god of Egyptian lore. He weighs the hearts of the dead to determine their final destination. He is also associated with embalming, and was able to rebuild Osiris' body when it was cut into pieces by the evil god Seth."
—Shin Megami Tensei: Devil Survivor 2 compendium

"Egyptian god of the underworld. In ancient Egyptian artwork, Anubis is portrayed as having a human figure with dark skin and the head of a jackal. He weighs the hearts of the dead to determine their fate. When Osiris was killed by Seth, Anubis was the one who reanimated the body, hence known for his skill in mummification."
—Shin Megami Tensei: Liberation Dx2 compendium 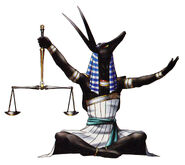 Anubis as he appears in Devil Summoner: Soul Hackers

Anubis as he appears in Persona 3 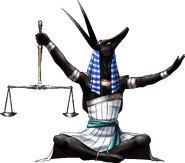 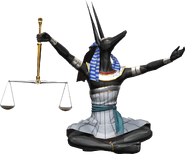 Anubis as he appears in Shin Megami Tensei: Liberation Dx2

Anubis as he appears in Devil Children Red/Black Book

Anubis as he appears in Shin Megami Tensei IMAGINE

Anubis as he appears in Card Summoner

Anubis as he appears in Devil Survivor 2

Anubis as he appears in Persona 5 Royal 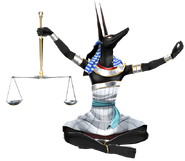 Anubis as he appears in Persona O.A.