Fukurokuju or Shou Shen (P2: IS)
"The comfort of death will come for men and demons alike... by the guidance of the Great Will."
—Angel in Shin Megami Tensei III: Nocturne's Game Over sequence

Angel is a demon in the series.

Angels are divine celestial beings that have been recorded in various religious lore, mainly Abrahamic, who faithfully serve God. The term "angel" comes from the greek word "angelos" meaning "messenger," as a translation of their name in hebrew "Malach," this term is used both to refer to the lowest rank of angels and the heavenly host as a whole. Angel, however, is not their name as a species, but rather a description of their task, as angels are best described as "spirits." The origin of angels is up to debate, but some suggest that they were created on the second day of creation by God from either fire or light as a manifestation of his boundless love.

In Christian angelology (the study of angels), they are said to inhabit the lowest sphere of Heaven, the sky of the Moon, while in the Quabbalah, they are said to inhabit the sephirah Malkuth and are led by the archangel Sandalphon. Their task is to protect humans as guardian angels and deliver messages and visions from God. Being the closest to humans, they are often represented in art as beautiful winged humanoids with halos, however, it is understood that angels lack a defined physical form and in scripture they often disguise themselves as plain humans in order to carry out their duties undisturbed.

Kaneko's design for Angel's clothing draws inspiration from the costume design for Leeloo in the 1997 movie: The Fifth Element. The designs in question were done by French designer Jean Paul Gaultier, who Kaneko stated he is a fan of.[1]

"Origin: Israel. The lowest rank of the angelic hierarchy. Their name means 'messenger' and their appearance is close to that of humans. They carry out the heralds' orders, so they interact with humans often. They protect the righteous and are said to be responsible for each human life."
—Shin Megami Tensei A-Mode DDS dictionary

"Ninth of the nine orders of angels. The 'watchers' who never sleep. Among these are the guardian angels who are assigned to every human at birth."
—Shin Megami Tensei III: Nocturne compendium

Angels are the lowest leveled demons of the Divine race, and they are also featured in the Game Over sequence.

"The ninth class of angels in the Angelic Hierachy. They appear in Christianity, Islam, and Judaism as manifestations of God's will. The generic angels depicted in paintings are almost always of this class.
The word "angel" means "messenger" in Greek. Angels serve as a link between God and humankind. They are also sometimes referred to as "servants." Angels appear in many parts of the Bible and other scriptures."
—Shin Megami Tensei IMAGINE compendium

Angel can be contracted at the Shinagawa field. She also appears regularly in support of various Divine and Seraph bosses, as well as acting as a field boss in Shibuya. A small miniboss angel can be encountered by parties of low level players in Kagurazaka Zhu Que Caverns. During the 2014 Christmas season, a variant with a unique model was introduced called Holy Night Angel.

"Ninth of the nine orders of angels. They are closest in nature to humans. They watch over individuals and warn those who stray from the path."
—Shin Megami Tensei: Strange Journey compendium

"Ninth of the nine orders of angels. They are closest in nature to humans. They watch over individuals and warn those who stray from the path."
—Shin Megami Tensei IV Apocalypse compendium

The first Angel can teach Nanashi the Dia, Hama, Patra, Magaon and Rakukaja skills through her Demon Whisper. She also benefits from learning Light, healing, support and ailment skills. The second Angel can teach Nanashi the Judgment Light, Luster Candy and Mediarahan skills through her Demon Whisper. The stronger Angel benefits from learning Light, support and healing skills.

Angel first appears in a forced battle at the Sky Tower entrance. She is accompanied by a Power who are attempting to punish a fellow Hunter for trespassing in the tower. When Nanashi and Asahi interject, the angels move to pass judgement on all of the Hunters present. While the more experienced Hunters handle the Power, Nanashi and Asahi are tasked with facing the Angel. Defeating the Angel will lead into a battle against Aniel.

"Ninth of the nine orders of angels.
They are closest in nature to humans. They watch over individuals and offer warning to those who stray from the path."
—Shin Megami Tensei V lore

An Angel is first seen after the protagonist awakens in the Netherworld. An Angel has Ichiro Dazai suspended in the air after finding the Jouin High School student. After offering to grant him sanctuary, the Angel flies off with Ichiro in tow.

Angel is a demon of the Divine order and begins appearing in the SEBEC Building. Contacting an Angel with Eriko while she has Nike as her active Persona may result in a special conversation where Angel's Spell Card is automatically acquired (Spell Cards obtained this way do not count towards obtaining the Avatar Totem).

Angel and Archangel can be used to perform the Justice Fusion Spell, a Light-based skill which reduces all enemies' HP by 50%.

"Ninth of the nine orders of angels. The "watchers" who never sleep. Among these are the guardian angels who are assigned to every human at birth."
—Persona 4 info

Angel is the first Persona of the Justice Arcana and can be obtained through Shuffle Time in Yukiko's Castle. Her Garu skill can allow for additional All-Out Attacks while confronting Shadow Chie.

Due to an error on the localization team's part, the compendium entry for Angel in the English version is not its own; rather, it is a copy of Archangel's entry.

"Ninth of the nine orders of angels. They are closest in nature to humans. They watch over individuals and warn those who stray from the path."
—Persona 5 background

Angel is the first Persona of the Justice Arcana and can be found as a Shadow in Kaneshiro's Palace and the Kaitul area of Mementos, with the title "Zealous Messenger." They are the first Persona to learn Hama and Kouha, and they are one of four to learn Dodge Curse. When itemized through an Electric Chair execution in the Velvet Room, Angel yields a Baisudi skill card.

Like the Shadow versions of Slime, the normal Shadow version of Angels possess the Self-destruct skill when fought which deals Almighty damage to all combatants on the field. This can lead to Self-destruct chains which can heavily damage the party when they are fought in groups.

Two angels accompany Uriel and Michael in the final dungeon, Qliphoth World. They will cast Recarmdra on the archangel if they are injured, sacrificing the rest of their health in the process. Taking them out is not required to best the archangel, but defeating them will have the archangel summon another one to replace the fallen one. It is recommended to use a Death Skill such as Mamudoon to take down all of them at once, as they are weak to curse and can be affected by status conditions or instant-kill effects.

Angels are a reoccurring enemy that begin appearing on floors in the Mecha Fortress. Unlike other enemies, they attack from off the floor itself, using a ball and chain to attack the brothers. In order to defeat them, the brothers must hit the ball and chain.

"Sweet creature that flies the heavens, delivering happiness and peace to all."
—Demonary, DemiKids

"Ninth of the nine orders of angels. They are closest in nature to humans. The word angel means "Emissary" in Hebrew and it is said that there are twice as many of them as there are humans. They watch over individuals and warn those who stray from the path."
—Shin Megami Tensei: Liberation Dx2 compendium

Angel as she appears in Shin Megami Tensei III: Nocturne

Angel as she appears in Devil Summoner: Raidou Kuzunoha vs. King Abaddon 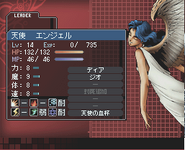 Angel as she appears in Devil Survivor

Angel as she appears in Devil Survivor 2

Angel as she appears in Jack Bros. 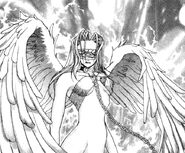 Angel as she appears in Shin Megami Tensei: Kahn

Angel as she appears in Persona 4