Bebe has short, straight blond hair and light blue eyes. At school, he wears the standard school uniform of Gekkoukan High School and carries around a Japanese fan with a yellow butterfly design. In the summer, he wears the red ties of his school uniform. On the weekends, he is wearing a long-sleeved black shirt with a darker gray dragon, gray pants and black shoes and carries a black case.

He is a cheery, kind foreign student, who speaks in a French accent and who is infinitely fascinated by Japanese culture and enjoys fashion design. Bebe is somewhat lonely in Japan, and is extremely pleased to have someone he can consider as a friend. He often refers to the protagonist using the honorific "-sama," holding the latter in high regard and loves to go to his favorite store, the Sweet Shop.

Bebe is generally a cheerful person who is infinitely fascinated by Japanese culture and enjoys fashion design. The protagonist would first meet Bebe when the latter returns Bunkichi's missing wallet at Bookworms. If the protagonist's Academics are high enough, he can read the new note inviting people to join the fashion club in Gekkoukan High School, which has turned away many other students because Bebe's usage of Japanese is quite haphazard and hard to decipher. Once he enters and talks to Bebe, the protagonist will not be able to refuse his invitation to join the fashion club.

Bebe was so fond of Mr. Ono's helmet that Mr. Ono gave him a Sengoku-era helmet earlier in the school year. The protagonist would be the only other person to receive a helmet from Ono if he accepts Elizabeth's request for the said item. During the Kyoto field trip, Bebe was extremely impressed by a shrine built out of matches being displayed in the gift shop of the hotel. He was also in awe of the many shrines he saw during the trip.

During their club activities, Bebe often learns bits about Japanese culture from the protagonist. Around the time the summer film festival starts later on, Bebe will invite the protagonist to enjoy French films to have him learn a little about French culture in exchange.

Bebe is somewhat lonely in Japan and is extremely pleased to have someone he can consider as a friend. He often refers to the protagonist using the honorific "-sama," holding the latter in high regard. He and the protagonist will sew together after school, and occasionally go somewhere to eat, his favorite being the Sweet Shop in the shopping district opposite Iwatodai Station.

Later on, Bebe receives a letter explaining that his aunt has just died. (He refers to her death as being "taken away by angels.") She was the main reason he was able to come to Japan, and her death means that his "mafia-like" uncle will force him to return to France. Bebe, determined to stay in Japan, decides to make a kimono that will impress his uncle enough for him to stay. After days of hard work, Bebe completes the kimono. He gives the protagonist a Money Pouch made from the leftover kimono fabric. Bebe then leaves for France, promising to return to Japan one day.

Bebe is the Social Link of the Temperance Arcana. After establishing the link, he will wait outside of the protagonist's class room to invite him to partake in fashion club activities. Bebe is available every Tuesday, Wednesday and Friday. If the link goes into Reverse, he will stand outside the Home Economics Room instead.

Two days before graduation, the protagonist gets a letter from Bebe (through Mr. Ono) that explains that his return trip may take longer than he had originally planned. Bebe just found out that aside from his aunt, his community pitched in to help finance the trip, and even if his uncle already gave his blessings to return once more, it would be hard for Bebe to enjoy himself as long as his uncle was grieving. While in France, Bebe entered a fashion contest which he easily won, with prize-winning designs named after his very good friend back in the country he has visited and loved very much. Bebe concludes in the letter that he intends to return to Japan to see the protagonist again as soon as he is able to do so on his own.

Completing this Social Link will unlock the Persona Byakko. In FES, it unlocks Yurlungur instead.

If the female protagonist chooses to tell Bebe that "aishitemasu" means farewell, Bebe will continue to say goodbye to the protagonist with those words, only to reveal (if his Social Link is maxed) that he knew what it had meant all along. Before graduation, the protagonist will receive a letter from Bebe back in France, revealing his love for the protagonist and confirming that he will always love her.

He appears in the home economics club. 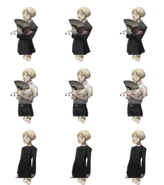 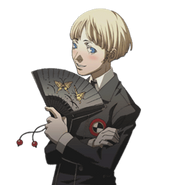 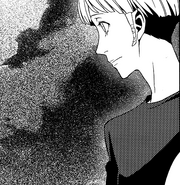 Bebe in the manga adaption

Bebe makes a cameo appearance in Persona 3 The Movie

Bebe with the group