Anat is a recurring demon in the series.

Anat, also known as Anath, Anant, Anit, Anti, Anaitis, Anait, Anthat or Antit, is a western Semitic goddess of war and mistress of wild animals, also associated with love and sex. In mythical texts, she is famous for having a violent temperament and for taking joy in slaughter.

In the Baal Cycle texts, Anat appears as a war goddess, initially called upon by her father El alongside the craftsman god Kothar-wa-Khasis to set the stage for the coronation of Yam; Anat, however, favors Baal, who is called her brother in this myth; outside Ugarit Hadad's sister was Hebat, however, and unlike Baal, Anat is not called Dagon's descendant in Ugaritic texts. After the defeat of the sea god she helps Baal secure the support of Asherah and threatens her father to let Baal build his own palace. She is later described ritually re-enacting a battle, and then purifying herself in her temple, where she receives a message from Baal asking her to establish peace on terms favorable to him. In response, she lists various past adversaries she vanquished to confirm she is a suitable goddess for this task. In the second half of the epic, she avenges her brother by killing Mot and with the help of the sun goddess, Shapash, brings Baal back from the land of the dead. This myth might represent the cycle of seasons, a single catastrophic drought, or perhaps simply another purely mythical conflict over divine kingship.

In the tale of Aqhat, Anat desires to obtain the legendary bow of the eponymous hero. After he rejects her various offers and taunts the goddess, stating that women have no business using such weapons, Anat, with her father's permission, devises a plan which culminates in his death and destruction of the bow.

Other Ugaritic texts, especially apotropaic formulas, usually pair Anat with Astarte, who shared many of her functions, and is also often assumed to be Baal's wife by researchers. In the Baal cycle, they only appear together once, preventing Baal from attacking Ym's messengers. Sometimes, she was also associated with Resheph[1], a Canaanite god similar to the Mesopotamian plague deity Nergal. Like Anat, Resheph was known for his violent disposition.

Her worship was introduced to Egypt, where she was also associated with Astarte, and was additionally considered the consort of the god Set, during the late bronze age conflated by the Egyptians with Baal Hadad and with Hittite weather gods. Her sexual aspects led her to be associated with Min, who is a god of male fertility. She was one of Rameses II's patron deities, who according to the pharaoh, watched over him in battle. He even named one of his daughters Bint-Anat, or "Daughter of Anat" in her honor.

During the period of Babylonian exile, among the Hebrew inhabitants of the island of Elephantine, she was known as Anat-Yahu, the wife of Yahu (God).[2] This association seemingly wasn't known in any other areas, and unlike fellow Canaanite deities Baal, Astarte and Asherah, Anat is not present in the Bible in any meaningful capacity, though "Shamgar, son of Anath" is a ruler mentioned in the Book of Judges.

Anat appears as an NPC within the Rainy Days Never Stay questline and it is possible to obtain her plug-in through it. She can be fused as a triple fusion of Kali, Pallas Athena and Hel.

Anat appears in the Womb of Grief on floors that have previously been cleared as part of the EX Mission Wardens of Womb of Grief. She appears once the previous Warden, Cybele, has been defeated, and upon defeat is replaced with the last Warden, Kali.

Upon defeat, Anat can be summoned through a special fusion requiring Tzitzimitl and Ishtar once the protagonist reaches level 80.

"The goddess of birth and death. She is Baal's sister and wife.
It is said that even her father El in the heavens feared her power. She is known for bringing Baal back from the land of the dead by going there herself and defeating its ruler, Mot."
—Shin Megami Tensei IV Apocalypse compendium

Anat can teach Nanashi the Mortal Jihad, Tarukaja and Hades Blast skills through her Demon Whisper. She benefits from learning Physical, darkness, healing and support skills.

"The goddess of birth and death in Semitic lore. She is Baal's sister and wife.
It is said that even her father El in the heavens feared her power. She cast an annual curse of death on the ruler of the underworld and her son/son-in-law, Mot, which caused the cycle of fertility of the land. Fertilized by the blood of men, her altar was constantly supplied with human sacrifices."
—Devil Summoner: Soul Hackers 3DS compendium

She is used in the Extra Dungeon battle with Kyouji Kuzunoha.

"The goddess of birth and death. She is Baal's sister and wife. It is said that even her father El in the heavens feared her power. She is known for bringing Baal back from the land of the dead by going there herself and defeating its ruler, Mot."
—Devil Survivor 2 compendium

"The daughter of Ugaritic's highest god El. She is the goddess of fertility, as well as hunting and war. Her characteristics are the characteristics of the seasons in Canaan."
—Persona 5 compendium

Anat is the ultimate Persona of Makoto Niijima. She appears as a humanoid transformation of Johanna. 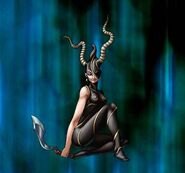 Anat as she appears in Shin Megami Tensei IMAGINE

Anat as she appears in Persona 5

Anat as she appears in Persona 5 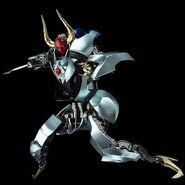 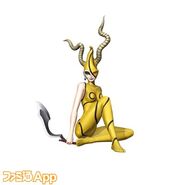 Anat as she appears in Shin Megami Tensei: Liberation Dx2