Ananta is a demon in the series.

Shesha, also known as Ananta, is the king of all nagas according to Hindu mythology and one of the primal beings of creation. He is sometimes called Ananta Shesha which means "Endless Shesha" as he is said to hold all the planets in the universe on his hoods. He is usually depicted as a massive coiled serpent with as many as five to one thousand heads, sometimes wearing an ornate crown on each head. The heads are not only venomous but spew fire as well. He was born from the mouth of the sleeping Balarama (sun god's brother) where he devoured all but Balarama's head.

Shesha is used by Vishnu as a bed, and he is often found sleeping upon his back. Shesha will also constantly be found singing about the glories of Vishnu from all his many mouths.

One story of Shesha tells of when he challenged the devas, claiming that only the great Hindu Triad could defeat him. Only the god of wind, Vayu, accepted his challenge. Shesha wrapped himself around a large mountain and told Vayu that he would be the winner should he destroy the mountain. Vayu created powerful storms, but Shesha simply enlarged himself and swallowed up the storms. Vayu, weakened from his attempts to defeat Shesha, was overpowered and swallowed by the serpent causing all living things to lose the ability to breathe. Luckily Vishnu told Shesha to release Vayu, Shesha obeyed, and in doing so the mountain he was wrapped around instantly crumbled.

At the end of each Kalpa (time period allotted to the earth), the serpent destroys all creation.

"Origin: India. One of the kings of the Nagas. It is a giant serpent with a thousand heads, whose name means 'infinite.' It sleeps under the earth and will watch over the end of the world with Vishnu. Until the time comes, Ananta will protect Vishnu for eons in the sea of milk."
—Shin Megami Tensei A-Mode DDS dictionary

Ananta appears as the final round boss of the Golden Ark Casino's Ultimate Battle area and as support for Vishnu in some of his later appearances as an event boss. Players can obtain his plug-in by gathering a large amount of items dropped in the Champion Course which is accessed by being the top player within UB for the month. He is a triple fusion of Qing Long, Koumokuten and Raja Naga.

He first appears as a boss that has taken over the Metropolitan Government Office. He is the primary lieutenant and pet of Krishna, later turning out to be vital to the Divine Powers' plan to become the rulers of a new universe free of Law and Chaos; he is killed after two boss fights against him and later turns out to have replaced Flynn in order to manipulate the party into destroying Merkabah and Lucifer while Krishna attempts to brainwash the real one into becoming his "Kalki," his own Godslayer and avatar, to transform into Vishnu-Flynn. Despite having been impersonated Flynn, it's implied that both Monotheist leaders recognize him as Shesha instead of Flynn, based on how they both called him the "False Messiah." In contrast, the disguise did not provoke any reaction to all humans present.

While he is initially a mindless animal, after his resurrections he develops sentience and a cruel personality that enjoys hurting the enemies of Krishna. After revealing himself, he attempts to kill Nanashi but Asahi interferes and Shesha devours her instead to power his own transformation into a Cosmic Egg. Depending on the ending chosen, Shesha is killed for good as the heart of the Cosmic Egg is destroyed or is utilized to create Dagda's dream universe.

When encountered in Miyashita Park in Shibuya, the battle can vary depending on equipment and partners. The Officer Red or Blue Hazmat outfits will mitigate the Fire damage from Venomous Flare. Additionally, the Blue Hazmat outfit will remove the risk of Nanashi being affected by Poison status also inflicted by Venomous Flare. Alternatively, the Green Uniform or Orange Uniform body armors will mitigate damage from Shesha's selection of Physical-based attacks, but the Blue Uniform bears a weakness to Fire attacks and will open up Nanashi to extra damage. Despite Dagda's warning, Ame-no-habakiri is not required to defeat Shesha, but the sword will make the battle much easier.

After Shesha's resurrection, they can be found on the highway overpass in Ikebukuro. In his new form, he is both smarter and more dangerous. Shesha retains his wide array of Physical skills and gains a few new ones as well. As before, the Hazmat Suit will reduce damage from Venomous Flare and prevent Nanashi from being afflicted with Poison if desired. The Pyro Coat body armor will completely nullify Fire damage or the Hero Red armor available in Kasumigaseki will resist Fire damage. The Ame-no-habakiri or Ame-no-murakumo aren't required to win the battle, but will make the process easier.

"A serpent with 1000 heads of Hindu myth. Ananta is Sanskrit for "infinite". After resting on him, Vishnu woke up and created the universe."
—Persona 3 compendium

Together with the Persona Vishnu, the two can perform a Fusion Spell, Infinity, which makes the whole party invincible for one round.

"The 1,000-headed serpent of Hindu legend, Ananta is Sanskrit for "infinite." After resting on him, Vishnu woke up and created the universe."
—Persona 5 background

Ananta is the fifth Persona of the Star Arcana and can only be obtained through fusion in the Velvet Room. It is one of the four sources of the Elec Wall skill and one of three Personas to learn the Growth 2 skill. Ananta is one of two Personas to learn Nuke Boost. When itemized through Electric Chair execution, Ananta produces the Hua Kohn accessory, which prevents its wearer from being affected by Bless insta-kills. Ananta required as an ingredient in an advanced fusion to produce both Vasuki and Lucifer.

Ananta is instead the fourth Persona of the Councillor Arcana in Persona 5 Royal.

Ananta can be obtained by rank fusing Naga eight times.

"A dragon said to swim the sea whenever the world approaches its final hour."
—Demonary, DemiKids

Known as Armasnak, he can perform the combo Dragon Cross with Ares.

Ananta blocks the way to the topmost levels of the Karma Temple once the party reaches an elevation of 21,832 ft. It relays a message left by Sera but then states the Embryon will be terminated if they refuse to obey.

Ananta gets 7 press turns a round and follows a few set turn patterns while fought. One of which uses the Nerve based Stun Wave and Dream Haze status ailments along with Sonic Wave to try to inflict Panic status. Another to use Dekunda if debuffed followed by 4 turns of Tarukaja. Ananta will typically focus on one person and use 5 turns of normal physical attacks, Power Charge, and then finish with another normal attack. Finally, there is also a pattern where Ananta will alternate between Mudo and Mudoon to try and kill the party for the whole round.

"A serpent of Hindu lore that appears at the beginning and end of the world.
Vishnu rested on Ananta, who stands on the endless milk ocean. After Awakening, he began creating the world."
—Devil Survivor 2 compendium

"A serpent with 1000 heads in Hindu lore. This god will appear in the beginning and end of a world. Ananta is Sanskrit for "infinite". After resting on him, Vishnu woke up and created the universe."
—Shin Megami Tensei: Liberation Dx2 compendium

Shesha begins each turn using "Glare" and "Move Slowly," which do nothing but use 2 of its turn icons

Shesha is weak to the Ame-no-habakiri and Michael's Spear, wielded by Gaston, as well as Gungnir. Once again, it begins every turn with the moves "Glare" and "Move Slowly," effectively giving it only two turns instead of four. After it attempts to heal, it will stop using "Glare," wasting only one press turn each turn, and will begin using "Charge."

Shesha is weak to the Ame-no-habakiri/Ame-no-murakumo and Michael's Spear, wielded by Gaston, as well as Gungnir. Unlike the previous two battles, Shesha will only use "Move Slowly" at the beginning of each turn. 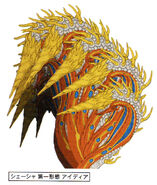 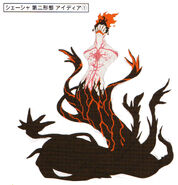 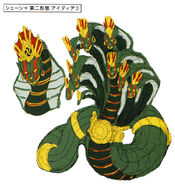 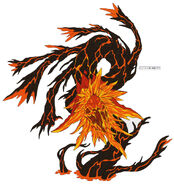 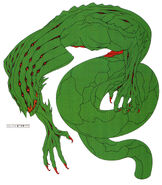 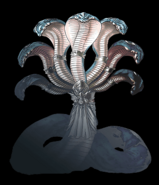 Ananta as it appears in Persona 3

Ananta as it appears in Devil Children Red/Black Book 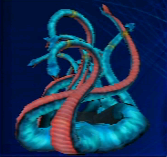 Ananta as it appears in Shin Megami Tensei NINE 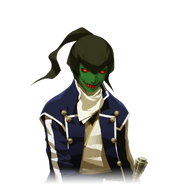 Ananta as it appears in Last Bible II

Ananta as it appears in Last Bible Special

Ananta as it appears in Card Summoner

Ananta as it appears in Devil Survivor

Ananta as it appears in Devil Survivor 2 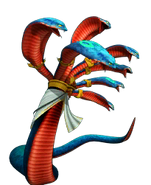 Ananta as it appears in Persona Q: Shadow of the Labyrinth 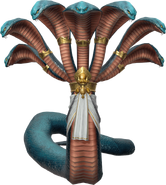