Amon-Ra, also known as Ra, is a demon in the series.

Amon-Ra is the combination of the gods Ra and Amun of Egyptian and Berber lore. Amon-Ra represents the essential that's hidden and Ra represents the revealed divinity. He had no parents and created himself. He was King of the Gods and one of the most well known alongside Osiris. His three wives are Wosret, Ammunet, and Mut.

"The chief god of ancient Egypt. His name means "he who is hidden," and he's commonly depicted in murals as a person wearing a large feather hat. Originally, Amon and Ra were two separate gods, but once the capital was moved to Thebes during the Middle Kingdom, the two gods were merged into one. They became Amon-Ra, sun god and supreme deity of Egypt. He's also the guardian deity of the pharaohs, and according to legend the pharaohs are his descendants."
—Persona World

Known as Amen Ra, he appears as the Ultimate Persona of the protagonist.

"A falcon-headed demon that rules the sun and despises anything that's dark and evil."
—Demonary, DemiKids

Known as Ra, he has the power Male Ego. 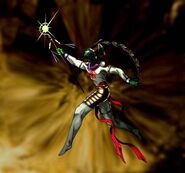 Amon-Ra as he appears in Devil Summoner

Amon-Ra as he appears in Card Summoner
Community content is available under CC-BY-SA unless otherwise noted.
Advertisement