Amon or Amaimon is a demon in the series.

Amon (also spelled as Aamon or Nahum, along with many other variations) is a great marquis of Hell and the seventh of the 72 Goetic demons who governs forty infernal legions. He is also one of the four personal assistants of Astaroth.

He appears as a wolf with a snake's tail who can breathe fire, or as a man with dog's teeth who is situated inside of a raven, or as a raven-headed man. Collin de Plancy took the artistic liberty of compressing Amon's two forms into one with the head of a dog-teethed raven, the body of a wolf, and a snake tail in place of its back legs. At the command of a mage, Amon may take the shape of man with a raven's head, having teeth of a canine. He tells of all things past and future. According to the Grand Grimoire, he is a direct subordinate of Satanachia.

He procures love and reconciles controversies between friends and foes. Some demonologists have associated his name with the Egyptian god Amun or with the god Ba'al Hammon of Carthage.

As Amaymon, also known as Amoymon or Amaimon, he is said to be a prince of Hell who represents the sin of Wrath and king of either the West or East. Asmoday and sometimes Gaap are said to be his servants. A silver ring is required to be worn on the middle finger when summoning him, as his deadly breath will kill the summoner otherwise.

Doi's design for Amon draws inspiration from both the Dictionnaire Infernal's illustration of Amon by Louis Le Breton[1] and Amon from the 2000 OVA: Amon: Apocalypse of Devilman.[2]

Amon is a demon that fuses with Akira Miyamoto when Akira awakens in the Earth Nomos of the Tower of Confinement. The power of his body had been taken by Mammon.

Amon is the first demon partner to Hazama. He joins him in the beginning of the game, when Hazama awakens in the Land of Nomos.

A demon who appears before Gina in Naraku offering her power. He is killed by Walter in the Domain he sets up, but bites him and warns that the infection will make him hunger for power and seek out the power of demons, dissipating afterwards. The infection grants Walter inhuman strength and regeneration, spawning mouths, hands, arms and tentacles from amputated limbs or just upon Walter's body. It's also causing him to see people as demons, such as the three Amaimons in Chapter 2, or hallucinating the demon's mouth and arms under Hugo's robes.

Later on, with the demon's "help," Walter escapes Mikado Castle and descends through Naraku, killing and eating the Minotaur in the process. After reaching Tokyo, Walter again catches sight of Amaimon in the mirrored surface of a cell phone. When attacked by Ashura-kai forces, the demon forcibly asserts control and kills the attackers, including Yaso-Magatsuhi. As time passes, Walter steadily loses control to Amaimon, becoming nearly bestial in combat.

After another brutal berserker rage, the tired Walter is approached by Hiruko, who is later devoured through an Amaimon mouth in Walter's chest to create a new demon.

"One of the 72 demons of Solomon's Ars Goetia.
He is the seventh spirit of Goetia and the Grand Marquis of Hell. Amon is depicted in several different forms, sometimes appearing as a wolf with a serpent's tail and other times appearing as having the head of an owl, the torso of a wolf and the tail of a snake sometimes replacing his hind legs altogether. It is said that he bestows knowledge of the past and the future. He is also incredibly loyal, having led his army to assist Satan when Satan rebelled against God."
—Shin Megami Tensei V lore

Amon is the quest starter for "The Winged Sun", where he commissions the protagonist to head to Tokyo Station in Chiyoda to reclaim the Winged Crest of Ra from Asura and Mithras. After he brings it to Amon, he turns on them, believing that the power of Ra would be enough to defeat them, but to his surprise, he loses.

Should players spare Khonsu during the quest "The Egyptians' Fate", the moon god will teleport in, referring the mortally wounded demon as his father, explaining that after having his Knowledge seized, resulting in him losing his true name of Ra and corrupting into a Tyrant, and was thus no longer eligible to use its powers. Amon then gives the crest to Khonsu before dying, which was part of Khonsu's plan to take the power of the sun god for himself.

Defeating Amon also unlocks him for fusion, where he retains his Megido Flame skill, in addition to unlocking Asura and Mithras.

Amon must first be revived as a zombie before eventually being brought to life.

Amonzom is summoned through Relic Fusions. He must be fused with his soul in order to create his regular form. Amon has the power DarkWall. 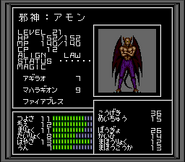 Amon in the Sega CD remake of Shin Megami Tensei