Ameno Torifune is a demon in the series.

Ameno Torifune is a heavenly kami in Japanese mythology, better known as Torinoiwakusufune. Apparently, it was built for the abandoned son of Izanagi and Izanami, Ebisu. It is usually seen as messenger of the gods and it was used as transportation by Take-Mikazuchi to descend to Earth.

Today "Torifune" is used as the Japanese word for "spaceship".

Ameno Torifune appears not as a demon, but rather as a method of transportation as a reward for completing the Challenge Quest Resurrection of the Kousoushin. Upon reviving the goddess Amaterasu, she rewards Flynn with the Torifune Shawl, which at certain spots will summon Ameno Torifune to fly him around the underground Tokyo as an airship. This enables access to remote regions such as the Central Breakwater section of Tokyo Bay. 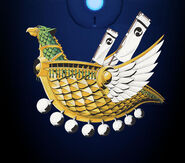 Ameno Torifune as it appears in Shin Megami Tensei II
Community content is available under CC-BY-SA unless otherwise noted.
Advertisement