Ameno-sagiri is a boss in Persona 4.

Ameno-sagiri, also known as Ame-no-sagiri-no-kami (天之狭霧神), is the Japanese spirit of fog, representing the heavens, that was mentioned in Kojiki. They, along with Kunino-sagiri, are children of Ohoyamatsumi and Kaya-no-Hime (themselves children of Izanagi and Izanami).

Ameno-sagiri abruptly appears at the end of the story. After the Investigation Team confronts the real culprit to the murders that had happened in Inaba, he escapes to Midnight Channel, spawning the dungeon called Magatsu Inaba. When the team manages to catch up and defeat him, his unconscious self was possessed by Ameno-sagiri, who manifests out of his body and begins talking to the Team.

Ameno-sagiri heralds itself as the granter of mankind's desires, and it believes that what it does – enveloping the town in fog and turning people into Shadows – is what mankind desires. Mankind, it thought, wishes to stop the sufferings they face in their daily lives, and by turning into Shadows, they will wander the endless fog, oblivious and uncaring of the underlying reality. It also reveals that the Midnight Channel is merely a part of the Collective Unconscious it governs, and the image of Taro Namatame that taunted them earlier in the month manifested by the subconscious eagerness of the Investigation Team to acknowledge Namatame as the killer.

However, it had not foreseen mankind's "hidden potential" – the ability to confront one's Shadow to summon Personas – that had manifested within the Team. Curious of this potential, it challenged the Team to see how far this potential might go. In its initial stages, it begins by disdaining the power of personas; however, as its health begins to drop, it begins trying to bargain with the Team and justify itself, and when nearing defeat, it desperately begins asking the Team whether they believed it was truly just to meddle with what it saw as Mankind's wishes. Despite its pleas, it was slain.

After the fight ends, Ameno-sagiri withdraws along with the fog it swept over Inaba, congratulating the "children of the new potential" and understanding their desire to continue living, but warns that it will continue to observe and watch mankind. In the events of the True Ending, Izanami reveals that Ameno-sagiri is actually an avatar of herself that she created.

In Persona 4 Golden, instead of Ameno-Sagiri being an avatar of Izanami, it was retconned to it being a part of Izanami along with Kunino-sagiri, Kusumi-no-Okami, and Izanami-no-Okami, who all originated from a being known as Izanami-no-Mikoto, created by the unconscious wish of people's minds to fulfill the "wish of the world".

Ameno-sagiri and Izanami-no-Okami used Marie, the amnesiac form of Kusumi-no-Okami, as an unaware spy in order to see the real world and inform the Sagiri what the "wish of the people" was. Marie's role is to absorb the mist in the real world if Ameno-sagiri is defeated; however, she did not remember this and had absorbed the fog into her body after Ameno-sagiri's defeat.

In the extended True Ending, Marie reveals that Ameno-sagiri, Kunino-sagiri and Izanami-no-Okami have fused with her before she disappears from the Velvet Room to go to parts unknown.

The battle with Ameno-sagiri begins directly after the battle with Adachi, and HP and SP counts will not be restored, which leaves the player at a slight disadvantage here. The party members should ideally be around at least level 70, in order to survive Nebula Oculus. The battle itself is relatively straightforward, and at least two party members should be pummeling Ameno-sagiri with Power Charge/Mind Charge boosted skills, while another should be healing the party. If possible, Trumpeter or Norn should be used with its Debilitate skill, as lowering Ameno-sagiri's stats will make the battle much easier. Yukiko, if used, can be useful for her unique skill Salvation, which will be useful for healing and curing the team from Foolish Whisper.

Once the player has lowered Ameno-sagiri's health enough, it will use Bewildering Fog. During this time, Ameno-sagiri cannot be attacked, so the player should use these turns to use Power Charge or Mind Charge and/or boosting stats, as well as guarding. While Ameno-sagiri is under the effects of Bewildering Fog, it will boost its stats and potentially use Mind Charge as well. If Ameno-sagiri has charged up, all party members should Guard soon afterwards in able to survive the subsequent Nebula Oculus. Yosuke, if used, can be useful with his Dekaja skill to nullify any boosts Ameno-sagiri has obtained. Afterwards, restart an offense by attacking Ameno-sagiri once more while having good HP maintenance, until its health is fully depleted. Note that after three fourths of its health is depleted, Ameno Sagiri will use Quake, which will knock down one or two party members, then use Bewildering Fog again. When this happens, repeat the above process.

Ameno-sagiri in an anime cutscene of Persona 4

Ameno-sagiri in Persona 4 The Animation

Ameno-sagiri in Persona 4 The Golden Animation 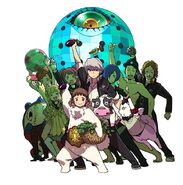