Ame no Uzume is a demon in the series.

Ame no Uzume is the goddess of dawn and revelry in the Shinto religion of Japan. She famously relates to the tale of the missing sun deity, Amaterasu.

Amaterasu's brother, the storm god Susano-o, had vandalized her sacred buildings and brutally killed one of her maidens because she refused to trust him. In turn, Amaterasu became terrified of his wrath and retreated into a cave. The world, without the illumination of the sun, became dark and the gods could not lure Amaterasu out of her hiding place.

The clever Uzume overturned a tub near the cave entrance and began a dance on it, tearing off her clothing in front of the other deities. They considered this so comical that they laughed heartily at the sight.

Amaterasu heard them, and peered out to see what all the fuss was about. When she opened the cave, she saw her glorious reflection in a mirror which Uzume had placed on a tree, and slowly emerged from her hiding spot.

At that moment, the god Ame-no-Tajikarawo dashed forth and closed the cave behind her, refusing to budge so that she could no longer retreat. Another god tied a magic rope across the entrance. The deities Ame-no-Koyane and Ame-no-Futodama then asked Amaterasu to rejoin the divine. She agreed, and light was restored to the earth.

"Origin: Japan. The goddess of god-entertaining. She famously danced to lure and angry Amaterasu out form hiding in the Ama-no-Iwato cave. She also danced before the unexpected guest Sarutahiko in the Tenson Korurin."
—Shin Megami Tensei A-Mode DDS dictionary

Like Divine race demons, Megami Demons, including Ame no Uzume, are not actually weak to Sword attacks, but take normal damage from them and resist everything else, making them only weak to Sword by comparison.

"Her full name is Ame-no-Uzume, meaning 'the terrifying female of heaven'. She is famous for luring Amaterasu out of hiding with her seductive dancing. Her husband is Sarutahiko."
—Shin Megami Tensei III: Nocturne compendium

Ame no Uzume was shortened to Uzume. If the Demi-fiend allows her to talk with Sarutahiko, her mythic consort, in a random battle, they will start a one-off special conversation, and Sarutahiko will eventually offer her an emerald (symbol of marriage) and leave. Uzume is the lowest-level member of the Megami clan obtainable by the Demi-fiend, and is needed to obtain Amaterasu in the Cathedral of Shadows through a sacrificial fusion between Yatagarasu and Take-Mikazuchi with her as the sacrifice.

Ame no Uzume appears as support for Take-Mikazuchi when he acts as the boss of the Shibuya Metro instance. She later appears in NPC form in the Nakano Stone Site bronze instance, where Sarutahiko acts as the final boss.

When items with her soul stone and Sarutahiko's soul stone are equipped, a player is able to use the skill Sexy Dance.

"A goddess of entertainment in Japanese lore. She governs many sacred dances. Famous for the episode of her provocative dance used to lure out Amaterasu, who had barricaded herself inside a cave. Later, she became Sarutahiko's wife."
—Shin Megami Tensei: Strange Journey compendium

Ame no Uzume appears as a client of the protagonist in Sector Eridanus, and requests he meet with Futotama in order to find Lady Amaterasu, who has gotten lost in the immensity of the Schwarzwelt. Once the meeting has occurred in Sector Fornax, the protagonist acquires a special mirror designed to destroy illusions; using it with the lone Kinmamon in Eridanus will cause her to shed her illusion and reveal herself as Amaterasu. Ame no Uzume and Futotama appear and are comforted by Amaterasu, leaving after rewarding the protagonist.

Ame no Uzume is the only member of the Amatsu Race without a fusion restriction and can be fused by default. She can be summoned through a special fusion of Napaea and Kabuso. Ame no Uzume can teach Flynn the Dekunda skill through her Demon Whisper.

"The goddess of entertainment in Japanese lore. She governs many sacred dances. Famous for the episode of her provocative dance used to lure out Amaterasu, who had barricaded herself inside a cave. Later, she became Sarutahiko's wife."
—Shin Megami Tensei IV Apocalypse compendium

Ame no Uzume can be fused by a special fusion of Napaea and Kabuso. She can teach Nanashi the Scratch Dance and Media skills through her Demon Whisper. Ame no Uzume benefits from learning healing and Light skills.

Ame no Uzume is the second Persona of the Priestess Arcana. As she ranks up, all of her stat increases go into Agility and Luck. Upon being returned to the Velvet Room at MAX Rank, Ame no Uzume will yield a Petradi Stone.

"The Japanese goddess of entertainment. She governs many sacred dances. Famous for her dance used to lure out Amaterasu, who had barricaded herself inside a cave."
—Persona 4 Golden compendium

Ame no Uzume is the first persona of the Aeon Arcana. She can only be fused once the protagonist achieves level 18.

"Japanese goddess of entertainment, she governs many sacred dances. She is most famous for luring out Amaterasu, who had barricaded herself inside a cave."
—Persona 5 background

Yusuke Kitagawa will reference Ame-no-Uzume's dance when the group reaches the door at the end of Akzeriyyuth in Mementos if it is blocked.

"Cute maiden and a very good dancer. Her adorable looks mask the tongue of a shrew."
—Demonary, DemiKids

Known as Aminoz, she has the power Team Spirit, which has her cheer on allies to victory.

S-Rank Ame No Uzume can be obtained on Jin's Route by getting a S-Rank in the last several missions of Center Makai.

Uzume as she appears in Shin Megami Tensei III: Nocturne.

Ame no Uzume in Persona 4 Golden

Ame no Uzume in Persona 5 Royal 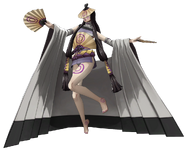 Ame no Uzume in Persona O.A.
Add a photo to this gallery

Retrieved from "https://megamitensei.fandom.com/wiki/Ame_no_Uzume?oldid=394450"
Community content is available under CC-BY-SA unless otherwise noted.