Naoto Shirogane (PXDN)
"Another summoner opposed me, once upon a time... unfortunately for him, I burnt that summoner to ash along with his demons. And I'll ensure that you meet the same fate, Raidou!"
—Amatsu Mikaboshi, Devil Summoner 2: Raidou Kuzunoha vs. King Abaddon

Amatsu Mikaboshi is a demon in the series.

Amatsu Mikaboshi (天津甕星*)?, originally known as Kagaseo (香香背男*)?, is the god of stars in Japanese mythology. He appears in the Nihon Shoki as a god who opposed the Amatsu in their take-over of Ashihara no Nakatsu Kuni (葦原中国*)?, the world between Heaven and Hell.

In Western pop culture, Amatsu Mikaboshi came to be seen as some kind of primordial evil god, but such notions have absolutely no basis on actual Japanese mythology where he's just a god like any other, not even seen as an evil one.

"Also called Ameno-kagaseoh, he is considered an evil god for refusing to follow the other Amatsu gods. He is said to have also refused to submit to Take-mikazuchi and Futsunushi's rule."
—Gouma-Den Devil Chart

During the King Abaddon crisis, Apollyon, a monstrous locust, was released, one that proved impervious to most forms of weaponry. It was revealed a necessary material for the creation of a sword capable of damaging Apollyon, the Shukukon-Seki, was in possession of Amatsu Mikaboshi, a powerful, rebellious god. At the time, he was imprisoned in the Confinement Chambers' 666th basement. Raidou was forced to ask Kohryu to grant him access to Mikaboshi's prison in order to acquire the needed materials.

Once there, Mikaboshi, the Star of Death, revealed he knew the Gouto-Douji of old, and mulled over his disdain of Yatagarasu. Amused that a new Devil Summoner sought his power, he fought with Raidou and was defeated after a massive display of power on both sides. Mikaboshi, stumped at how he was defeated by a messenger of Yatagarasu's will, gave Raidou the Shukukon-Seki, allowing him to create the Youmetsutou sword, and unlocking Mikaboshi for fusion in the Chaos and Neutral Paths.

If on Chaos or Neutral paths, he will at least gain a measure in comfort in that Raidou does not necessarily obey Yatagarasu blindly, but does his job out of his own will. On a darker note, though, he also reveals he's responsible for the death of another Summoner, implying it was an earlier Raidou.

Mikaboshi fights by continually teleporting around the arena, occasionally stopping to throw either elemental spells or Mute Ray. Mute Ray not only deals considerable damage, but if it connects against a demon, it will be sealed in its tube and won't be allowed to rejoin the fight. Mikaboshi can also create a damaging area with Star's Funeral and deal unblockable damage to the entire arena with Demonic Star. As the fight carries on, he will also start using Dissolution to push Raidou away and prevent close-quarters combat, and combining spells, such as firing Mute Ray while also casting Star's Funeral. While he is weak to Ice and Force, it may be rather hard to hit him as he teleports around.

"Also known as Ame-no-Kakaseo or Hoshi-no-Kakaseo, he is the Japanese god of stars.
In the Nihon Shoki, the gods Take-Mikazuchi and Futsunushi tried to subjugate Ashihara no Nakatsu Kuni during the Tenson Kōrin, but Amatsu-Mikaboshi resisted them until the very end, granting him the epiteth of "disobidient fierce god." However, in the end he was defeated by Shitsuri and Take-Hazuchi."
—Persona World

Amatsu-Mikaboshi is the highest-leveled Persona of the Tower Arcana, as well as the only one that does not need a Totem to be fused. His return item is the Doggerel Tablet, which can either be used in battle for a one-time only Mamudo spell, or in fusion to teach Mamudo to a Persona.

Amatsu Mikaboshi appears as Naoto Shirogane's new Persona that awakened after Naoto was attacked by Sousei. Unlike Naoto's former Personas, it lacks any combat proficiency due to Naoto's desire to support her friends. When Naoto asked Touko Aoi and Tetsuma Tsuge about the reason why her new Persona is so different from the others she had before, she was told that Personas are representations of the user's psyche, hence the Persona's rather female appearance after Naoto started to embrace her femininity. It knows an exclusive skill named Ability Tune, allowing it to synchronize with the abilities of other Personas. Its Arcana is unknown, as it could be a different Arcana to Naoto's usual Fortune Arcana thanks to the shift in her psyche.

Amatsu-Mikaboshi as seen in Raidou Kuzunoha vs. King Abaddon 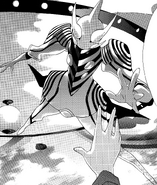 Amatsu Mikaboshi as it appears in the Persona x Detective Naoto manga adaptation
Community content is available under CC-BY-SA unless otherwise noted.
Advertisement