Amane has shoulder length purple hair with charms hanging in her hair and a white lotus headband. She has faded purple eyes. She is always seen with an emotionless frown but sometimes with a slight smile.

She wears the robes of Shomonkai that appears as an orange and white thigh length dress with two slits on the front and long sleeves that connect between her legs. She also wears orange boots with the same flower as the one on her head.

Amane is a very cold, impassive girl. Unlike her father's wishes to create chaos, Amane truly believes through Remiel that salvation can be achieved by following God.

In Overclocked, through her route, it is revealed that her father was the one who taught her to be emotionless. After spending time with the group, Amane regrets not having a normal high school life, as she was now being more active on her own.

Amane Kuzuryu is the maiden of the Shomonkai, a mysterious cult, and the cult leader's daughter. She showed up in front of the protagonist and his friends in the Aoyama Cemetery, warning of the strength of the demon Wendigo. Amane can join the group in Day 7 depending on the route taken. As a playable character, she is the most potent spell caster in the game with by far the highest magic (even more than Yuzu). However, to compensate, she has only a movement of 3 and average to low in other stats, making her a glass cannon of sorts.

It is also revealed that she defeated one of the Four Devas, tasked with the protection of Tokyo, six months prior to the events of Devil Survivor. She did so by using the demon Jezebel, whom Belberith placed into her. When the War of Bel is waged, the angel Remiel also possesses Amane to help protect her and keep Jezebel sealed.

It is implied that she, along with everyone else left in the Yamanote Circle, is killed by God's Thunder.

As the protagonist's party attempts to break through the lockdown, Amane shows up, teamed with Misaki Izuna, and attempts to assist the angels in preventing the lockdown from being breached. This time is one of the only times when enemy units (Amane) makes use of Samarecarm to revive fallen teams, rather than fallen team members.

Upon defeating the angels, Amane and Izuna, the party escapes, and Remiel becomes available for fusion.

After the party coerces Naoya to aid them in reprogramming Babel, Remiel explains that Jezebel was struck down by Belberith while they were gone. Considering that Amane's soul was never disentangled from Jezebel, and that Remiel does not cease his possession of Amane in this route (as he does when she is freed), it is likely (but not directly stated) that this destroyed Amane.

Amane and Remiel reveal that the summoning server which the party wants to destroy is located in the demon world, and to reach that, the protagonist must become the King of Bel. With the use of the COMPs and Remiel's help, the party gets transported into Amane's soul to destroy Jezebel. When the demon is vanquished, Remiel leaves Amane's body as well, but leaves Amane with enough information to direct the party in fusing the demon world with the human world in order to close Babel.

It is revealed by Commander Fushimi that she was taken into custody by the SDF. She is not otherwise seen.

Amane guides the protagonist throughout this route in becoming a Messiah. She is shown to be knowledgeable of Japanese mythology, as she explains the origin of Susano-o and Okuninushi. The maiden also confides that her father encouraged her to remain emotionless, and admits her upbringing prevented her from having a normal teenage life.

Amane has a movement range of 3 and speed of 50, which makes her worse than Yuzu in movement. This generally results in competition with the three other possible Magic users (Yuzu, Midori and Mari). However, she possesses the best Magic growth, having that stat maxed out at the earliest point in time compared to all other characters. Her extremely high MP growth also makes her well-suited for abusing expensive Almighty attacks and healing spells, should the player decide to use offensive elemental spells on other magic users.

Amane first appears here (known as "Priestess") and helps the protagonist's party fend off a Wendigo. After the Wendigo's defeat, it escapes, and Amane leaves the battle in pursuit of the demon.

As the protagonist's party attempts to break through the lockdown, Amane and Izuna appear, and attack the party in order to keep the lockdown in one piece.

The first step to becoming the King of Bel is to defeat Jezebel, who resides in Amane's soul. To get there, Naoya plans to capture Amane, though she comes accompanied with 8 Shomonkai members who need to be taken care of.

Mind Amanes are summoned by Jezebel after enough damage has been dealt to her. They must be defeated to prevent Jezebel from regaining control of Amane's soul. Jezebel will continuously spawn Mind Amanes if there are less than 2 copies left on the battlefield. 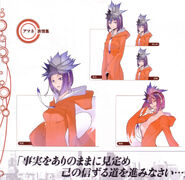 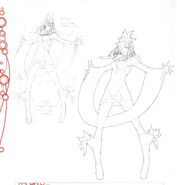 Amane Kuzuyu in the manga adaptation