Alraune is a demon in the series.

The basis of the story of Alraune dates to the Middle Ages in Germany. The humanoid-shaped Mandrake root or Mandragora Officinarum was widely believed to be produced by the semen of hanged men under the gallows. Alchemists claimed that hanged men ejaculated after their necks were broken and that the earth absorbed their final "strengths." In some versions, it is blood instead of semen. The root itself was used in love philters and potions while its fruit was supposed to facilitate pregnancy. Witches who "made love" to the Mandrake root were said to produce offspring which had no feelings of real love and had no soul.

The name Alraune, which is the German word for Mandrake, comes from a 1911 book of the same name by German author Hanns Heinz Ewers, which uses the original legend as a basis for the book's plot.

Kaneko's design for Alraune draws inspiration from imagery in the opening of the 1980 anime The Rose of Versailles.[1]

Kaneko's design for Alraune draws inspiration from the 1973 book: World Yokai Picture Book's Alraune.[2] As there are no known earlier illustrations of Alraune, this most likely served as inspiration for Alraune in other media such as Castlevania.

"A cursed Norse spirit in the form of a beautiful woman, known to bloom from the blood of hanged men.
She was believed to tell secrets if properly tended to."
—Shin Megami Tensei: Strange Journey compendium

"Mmm, the blood from humans like these is so scrumptious. It has this thick texture that lingers on the tongue."
—Alraune

Alraune creates a Domain in Naraku and has taken Navarre and a master Samurai captive in order to feed on them. She loves the taste of the selfish Navarre who tries to harm his fellow samurai, but calls for their aid when in trouble. She refuses to give him over and a fight starts. Deciding to diet tomorrow, she wants to enjoy all that delicious blood today. Her captives are freed once she is defeated.

Alraune later appears as a normal enemy in the initial areas of Blasted Tokyo. She can teach Flynn the Madness Needle, Life Drain and Stun Needles skills through her Demon Whisper.

"A cursed Norse spirit in the form of a beautiful woman, known to bloom from the blood of hanged men.
She was believed to tell secrets if properly tended to."
—Shin Megami Tensei IV Apocalypse compendium

Alraune can be found in Minami Sunamachi. She can teach Nanashi the Madness Needle, Sexy Dance and Blast Arrow skills through her Demon Whisper. Alraune benefits from learning ailment and Gun skills.

Despite being seemingly identical to Alraune (Jusei Race), Alraune (Demonoid Race) is a demonoid created by Dr. Hirasawa and appears on the floor above Hirasawa's Lab. Alraune's data can be downloaded from a terminal on the same floor, which is the only way to recruit Demonoid Alraune. However, Demonoid Alraune cannot be fused with other demons, hence taking up a slot in the DDS. 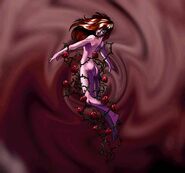 Alraune as she appears in Devil Summoner: Soul Hackers

Alraune as she appears in Persona 4 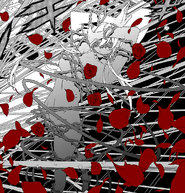 Alraune as she appears in Raidou Kuzunoha vs. The Lone Marebito

Alraune as she appears in Card Summoner