Albion is a demon in the series.

Albion was the ancient name of the British Isles, and according to the writings of 17th Century poet William Blake, Albion is also the name of the primeval Giant whose death and division results in the creation of the four Zoas: Tharmas, Luvah, Urizen, and Urthona.

In the mythical story of the founding of Britain, Albion was a Giant son of Poseidon, the Greek god of the sea. He was a contemporary of Heracles, who killed him. Albion founded a country on the island and ruled there. Britain, then called Albion after its founder, was inhabited by his Giant descendants until about 1100 years before Julius Caesar invasion of Britain, when Brutus of Troy came and defeated the small number of Giants that remained (as a group of the Giants had killed all the others).

"The ruler of ancient Britain. He is the first giant of Britain. It is said that he was born from Amphitrite, the wife of Poseidon."
—Shin Megami Tensei III: Nocturne Compendium

Albion is one of the three guardians of the Amala Temple, specifically the White Temple. When the battle starts, he will summon the four Zoas to his aid. Each Zoa has a specific elemental property, repelling a certain element while being being weak to another. Should all four Zoas be defeated, Albion will resurrect them, and if Albion is defeated, the Zoas will also resurrect him.

After Albion is defeated, he drops the Adama Magatama and can become the Demi-fiend's minion by evolving a Gogmagog.

Albion was first introduced during the 2014 Kappa and the Lost Utopia event. By defeating enemies in the Yodobashi Underground, players were able to spawn him alongside Tharmas, Luvah, Urizen, and Urthona. To defeat him in hard mode, players needed to balance damaging him and his Zoa minions, as defeating him while they were still alive caused him to respawn and defeating them would lead to him respawning them after a short period of time. By defeating him, players had the opportunity to acquire his plug-in and gain the ability to create him through a triple fusion of Knocker, Ubelluris, and Titan.

He and the Zoa have a unique feature called Milton, which allows them to gain 100% elemental resistance according to which Zoa are in the party. After Mitama fusion, he completely nulls all physical attacks, ice, expel, death, mystic, nerve, and mind affinities. Through this and the Milton feature, it is possible to make him completely resist all damage outside of almighty.

"The ancient ruler of the island of Great Britain. He was the first giant living on the island, even before the Gogmagogs. In Greek Mythology, he was a giant born between Poseidon and Amphitrite."
—Devil Summoner: Soul Hackers 3DS Compendium

Albion is a demon exclusive to the 3DS remake, available after Nemechi evolves into the angel stage of the female growth path, and can be purchased for 300 D-Souls.

Albion as he appears in Shin Megami Tensei III: Nocturne 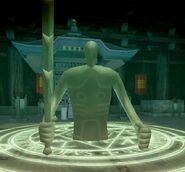 Albion as he appears in Shin Megami Tensei IMAGINE