Al Azif is a Persona in Persona 5 Royal.

Al Azif is the original Arabic name for the Necronomicon, a fictional tome of forbidden knowledge first mentioned in the short story The Hound written by H. P. Lovecraft. The book subsequently also appeared in stories of Lovecraft's followers, and has since gained a cult following and various fake "replicas" of the book are circulating.

In the context of Lovecraft's works, Al Azif is a tome detailing the truth behind the various ancient cosmic beings that have inhabited Earth and continue to influence humans for their own ends. Written in the 8th century by the "mad Arab" Abdul Alhazred, it both functions as a means of imparting the forbidden knowledge of the ancient ones, and a source of danger as those who read it risk going mad from its knowledge.

"The original name of the Necronomicon, a tome of the Cthulhu Mythos's mysteries. Said to have been authored by Abdul Alhazred, a poet and devotee of Cthulhu known as the 'mad Arab.'"
—Persona 5 Royal compendium

Al Azif is the third-tier Persona of Futaba Sakura. Its Trait is Infinite Scheme: All-Out Attacks may defeat all foes and fully restore HP to all allies. 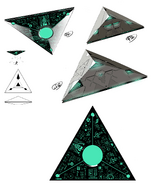