Karukozaka High School
Akira Miyamoto is a character from Shin Megami Tensei: if....

Akira Miyamoto seems to have a reputation as a troublemaker, as one of the disciplinary committee members says he is "up to something." He cares more about revenge than returning to the human world. The janitor also mentions that he wishes to become a boxer and the former wishes to train him to be a champion.

Akira is a student of Karukozaka High School, Class 2-C. He is a playable character only available after beating the game with either Yumi, Charlie or Reiko. His route is the "revenge" route against Hazama who sucked the school into the Expanse. Different from other routes of the game, Akira does not visit any kind of Sin World, but instead the Land of Nomos. As Akira tries to find a way out of the Tower of Confinement, he is put on the brink of death by Hazama and becomes possessed by the demon Amon. The Amon-Akira merged Akira, eventually slays Deity Emperor Hazama with the player's help. He then takes his place as the new Deity Emperor and stays there while returning the player to the human world, however the school remains in Makai.

Akira's stats are chosen at random from 4 different distributions:

Akira possessed by Amon in "if..." novel

Amon Akira with Ideo Hazama in the PSX remake 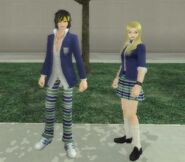