Hiroshi Kamiya (Drama CDs)
"The meaning of my life is not something I should worry about. It's really what others think of my life or what I was able to do for them. So... for me, or you, or anyone... the meaning of our lives is something that we make but don't see. People can't survive without help from others. ...We all depend on one another."
—Akinari Kamiki, Persona 3

Akinari Kamiki is a character from Persona 3.

Akinari has slightly long, light gray hair, and matching color eyes. He has a very pale complexion, and wears a blue and white striped collared shirt with black pants.

Akinari is a depressed, yet intelligent teenager who doesn't have much time to live due to being afflicted with a debilitating degenerative genetic disease. He has realized the finality of his death, and doesn't bother with denial or hope. Though he never finishes them, he finds solace in his books, and decides to write his own story about finding the meaning of life. Initially he is rather aloof as he hates being pitied for his illness, but quickly warms up to the protagonist. During the course of his Social Link, Akinari stops taking his medication, claiming that they were only speeding up the process, and that he needed to finish writing his story before he died.

Also known as the Dying Young Man, Akinari is first seen at Naganaki Shrine, where he plays with Maiko Oohashi during her third level Social Link.

Akinari's Social Link requires Maiko's to be at least Rank 3.

The Social Link is initiated by the protagonist speaking to Akinari on a Sunday (the only day he is available) at Naganaki Shrine, speaking to Koromaru in the dorm after he has joined SEES, receiving Akinari's red fountain pen from him, then returning the pen to Akinari. However, the Social Link with him is only available if the protagonist's Academics have reached the Smart rank.

Akinari is a teenager who has been diagnosed with an incurable, life-threatening genetic disease, and isn't expected to live much longer. As such, his outlook on life is bleak. He finds it hard to identify with normal, healthy people, but eventually comes to enjoy the company of the protagonist, and looks forward to his visits every Sunday afternoon.

As the Social Link progresses, Akinari begins to write a story about a bird and an alligator that begins happy, but he has trouble ending it on a happy note, at one point deciding to end it with the alligator accidentally swallowing the bird, and being sad about his unfortunate actions for the rest of his life. Later, Akinari decides that life is worth living to its fullest, and finishes the story on a happy note.

At the end of the Social Link, Akinari gives his notebook with his story in it for the protagonist to keep, with his final wish granted, he smiles and bids the protagonist farewell, disappearing into the sunlight before the protagonist's eyes, implying he already died some time ago and this final meeting was his spirit. 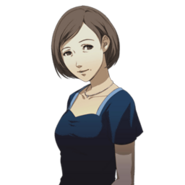