Ixquic, real name Akari Hoshi, is one of the members of the Masked Circle in Persona 2: Innocent Sin. in Eternal Punishment, she is instead a regular character.

A 13-year-old girl with a very lively imagination, Akari Hoshi fashioned herself as the reincarnation of an ancient Mayan warrior, Ixquic. In the same vein, she entered the Masked Circle as a recruit of sorts under King Leo and was sent to delay the team led by Tatsuya Suou when they tried to interfere with the Masked Circle's plans to destroy both Smile Hirasaka and the Aerospace Museum.

She used her Persona, Reverse Pairika, along with Belphegor to ambush Tatsuya at Smile's bathroom and was defeated there. Next she appeared in the Aerospace Museum, trapped aboard a model plane as the museum burned around her. Maya Amano leapt to her rescue despite her pyrophobia, overcoming her fears. She was offended the bombs were still going off when she was still inside and confronted King Leo about this; his only response was to take her hostage as he detonated both Smile and GOLD Gym; she, however, managed to break his hold, allowing her to escape with the heroes.

Once free, at Sumaru's shore, she vowed to put the Masked Circle behind and began drawing manga, the first of which would be a story of five heroes performing good deeds.

She initially cares very little for her own life, as she really doesn't like either her parents or the life she leads, and carries a large papier-mâché sword.

"Very spirited girl who thinks she is a reincarnated warrior of some sort."
—Her introduction, Persona 2: Eternal Punishment

In the Eternal Punishment timeline, she mostly hangs around the Giga Macho music store, hoping to locate some of the rumored demons that live there.

"Reincarnated from the stream of "purr-pit-you-it-e"! I, Ixquic, the Mage-Warrior, am gonna whoop your ass in the name of all that is just!!"
—Akari Hoshi, Persona 2: Innocent Sin (PSX fan translation)

Xquic is a mythological figure known from the 16th century Kʼicheʼ manuscript Popol Vuh. She was the daughter of Cuchumaquic, one of lords of Xibalba.

Ixquic's portrait from the PSP remake of Innocent Sin 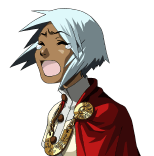 An ad for Megaten Battle Royal

Nanako as Ixquic in Persona 4: Dancing All Night