Naomi Ōzora
"That bastard no longer cares about mom anymore...no, he doesn't even care about me anymore. He kept trying to find another woman, so he found me as a hinderance. It would be better off he wasn't my father!"
—Akane Hasegawa, Persona 5 Strikers

Akane Hasegawa is a character from Persona 5 Strikers. She is Zenkichi Hasegawa's daughter.

Akane is a young girl who has short dark brown hair that has a small red hair clip on the left side and dark brown eyes. Despite her appearance, she is actually graduating secondary school, indicating her age is around 14 - 15 years old.

She wears a black school uniform with red details and she often wears a pink backpack on her left shoulder.

As a King, her original hair color is paler with red highlights, and has red lipstick. She wears a black mask with a red tear motif underneath her right eye. She wears an outfit resembling the protagonist or Sumire Yoshizawa's Metaverse outfit, consisting of a black ankle-length tailcoat, long red fingerless gloves, a black and red pleated plaid skirt, black thigh-high socks and red boots. Her Crown manifests as a large top hat with a red stripe and black star. If it's removed, she loses control of the Jail.

During the boss battle she has no form to battle the Phantom Thieves, but she can summon cognitive doppelgangers of them. The copy fought in-game is My Dear Joker.

Akane is a huge fan of the Phantom Thieves of Hearts, and her room had Phantom Thieves products all over it, many of them which she made herself. She's also a live streamer and is capable of disguising her voice in a manner that resembles Joker's manner of speech while acting as a Phantom Thief.

In reality, Akane just outright despises all law enforcement because they failed to investigate the culprit behind her mother's death, despite having witnessed it herself. Zenkichi Hasegawa, her father, seemingly does nothing to investigate despite her pleas and rarely came home, resulting her to resent her father to the point that that she refers him by his name and treats him coldly despite his attempt to care for her. She does not trust others easily, due to her disappointment in her father.

Her personality flaws are heavily flanderized and exaggerated by EMMA because she absentmindedly asked for her help. Due to EMMA's distortions, she goes completely out of character and acts more like Akira Konoe than herself. Her resentment towards any and all accomplices of law enforcement became outright hatred, and her trust issues degenerate into violent paranoia and a savior complex, believing herself to be the only one capable of saving others. She also starts parroting Konoe and EMMA's designated goal for her and Konoe's "Operation Oracle" as if it was her own, namely changing the Phantom Thieves' hearts or killing them if she can't, then changing the heart of her mother's killer, completely ignoring that she's actually being manipulated by Konoe on his deluded conquest against crime and shackling humanity in chains.

"I won't be deceived by those pretty words anymore...there's nobody I can believe in anymore. Police, that bastard, and even you guys..."
—Shadow Akane, Persona 5 Strikers

Two years ago and a year before the events of Persona 5, her mother Aoi Hasegawa died in a traffic accident and was covered up, leaving no evidence to be found, as the culprit is supposedly dead and left a suicide note saying that he did it. In reality, the incident's culprit was a corrupt politician who once lobbied for Masayoshi Shido named Jun Owada, whom Akane personally saw running over her mother. Owada killed Aoi while drunk driving and subsequently pinned the crime on his subordinate, who quickly committed suicide with a forged suicide note planted near him as evidence. When Zenkichi attempts to investigate the case on his own (due to Owada interfering with the police's own investigation using his ties with Shido), every evidence he used against Owada was destroyed before he was sent a death threat warning him that Akane might be killed as well. Zenkichi stops his investigation to protect his daughter, and he was removed from that incident's investigation due to being an associate of the victim. As a result of Zenkichi's failure to investigate the truth, Akane distrusts her father, believing that he had abandoned her, and has by extension grown to resent all policemen for their failure of investigating her mother's death.

After this incident, Zenkichi and Akane moved to Kyoto where her grandparents are around, where she would often be at home alone. He gave her money and her grandparents gave her food, although she does not leave her room much and doesn't have any friends in Kyoto (due to being too depressed to socialize with her peers). She is now a 3rd year student in middle school. She develops an obsession with the Phantom Thieves since lat year, due to their apparent tendencies against the police. It's implied that she knew how they looked like only based on the calling card/broadcast hijack directed against Shido in one of her live streams last December, since she doesn't recognize its members personally and the figures she created are black silhouettes of their members.

The party first meets Akane when Zenkichi makes a midway stop to Kyoto to meet his daughter. When the protagonist and Futaba started to take her call for Zenkichi, she quickly became furious and believed that Zenkichi was hanging out with other women. When the party arrives to Kyoto despite discouragement from Zenkichi, they spot Akane having a quarrel with Zenkichi in front of her mother's grave. The party explains to the girl that they were just people working with Zenkichi to solve a case. Akane seems to be incredibly disrespectful to Zenkichi, to the point that Futaba comments that Sojiro will become depressed if she treated him like that. The Hasegawas and the party arrive to the Hasegawa residence, where the group prepares a curry dish for Akane and give her some much needed company. After a while, the party visits Akane's room where she is revealed to be a Phantom Thief affiocando, with her room being filled with memorabilia and with her hosting her own Phantom Thief-themed live stream. She doesn't recognize the Phantom Thieves themselves are the teens standing right before her.

When Makoto helps Akane study for her high school entrance exams, she explains that she did see the culprit who killed her mother and nobody ever believed a thing she said. The culprit also blamed the incident to his secretary and forced him to commit suicide. Despite Makoto reassuring Akane that her dad cared for her, she breaks down in tears insisting that he didn't.

Zenkichi dials the protagonist that he has found concrete evidence of Madicce instigating the incidents when the party was taking a break in Fukuoka, forcing Haru to rush Makoto's van into Kyoto due to Makoto being sick. Zenkichi exposes a conspiracy between Jun Owada and Akira Konoe, who conspire to use their influence to force the arrest of the Phantom Thieves to cover their tracks. Owada and the National Police Agency chef (who was brainwashed by Konoe) bribes Kaburagi to arrest the Phantom Thieves in Kyoto, only for Zenkichi to intervene. He was arrested for preventing the Phantom Thieves' arrest, and the police emptied the Hasegawa residence for proof.

Akane is seemingly found bound on a pillar inside the Jail, only for her to reveal herself as her Shadow, awho manifests her Shadow clothing and capture the Thieves as designated by EMMA with a security-enforced wooden cage. The only member who narrowly escapes the trap is Futaba, who wasn't able to run fast. When found, Shadow Akane has been distorted to the point that she had basically became an extension of Konoe's "Operation Oracle," and started acting like Konoe instead of herself. She thought the Phantom Thieves were betraying her because they assisted Zenkichi and that they were terrorists and evildoers who must get their heart changed.

Fortunately, Sae Niijima arrived in time to assist Makoto and the other Phantom Thieves, using her influence allow Zenkichi to be released from interrogation. He quickly goes to the Jail alongside Futaba who narrowly escaped, and must sneak past Shadows due to lacking a Persona. When Zenkichi arrives in time and tries to confront her by explaining that he was being blackmailed, she angrily blows him off by pointing out that, even if she forgave Zenkichi for not solving the mystery of her mother's death to protect her from harm, he still leaves the name of Owada's secretary tainted. She also tells Zenkichi that he isn't any different from Owada, and announces her plan to change the hearts of the Phantom Thieves, then changing Owada's heart on her own because nobody else was capable of bringing him to justice. In reality, these were not her own plans, but Konoe's plan to use the fabricated Metaverse to create Monarchs and end all crime.

The revelation makes Zenkichi realizes that his neglect to his daughter had caused her distortions to be actualized by EMMA, and he awakens to Valjean. After defeated the Shadows she sends out, the apparent Shadow Akane reveals herself to only be a projection of the real one and vanishes, allowing Futaba to free the party from the wooden cage and enabling exploration of Kyoto's Jail. Unlike with the other Monarchs the thieves have face up till that point, Akane does not appear to have a Lock Keeper that requires them to return to the real world; instead, she is fought immediately at the end of the Jail. When confronted, she obviously wasn't in a right state of mind, delusionally telling the Phantom Thieves that they are fakes and she will execute them before going after her mother's killer. Despite this, she does not attack them herself or transform, but instead summons cognitive copies of Phantom Thieves to attack. Each phantom thief faces their cognitive copy alone (with exception to Zenkichi and Sophia, who instead provide support to the others) with Joker facing his own copy, My Dear Joker. After the battle, Zenkichi and Shadow Akane finally come to an understanding, and she calls Zenkichi 'dad' before vanishing to return to her real self. When Zenkichi checks in on her in reality, it turns out she is just asleep in bed the whole the time, and after her change of heart, she becomes much kinder to her father and the two are now able to converse more easily.

While she was never seen again later on and only mentioned in passing, Konoe's sheer ignorance of entrusting EMMA in manipulating Akane to further his goals proven to be his downfall. Only when his heart was changed and Zenkichi and Kaburagi came to Madicce personally to arrest him does he knew EMMA picked the wrong target for him. Because of the incident, Zenkichi was also a lot more furious when dealing with Konoe, and via the valuable testimony of the fallen CEO of Madicce, Owada, who was one his would-be victims was arrested as well. 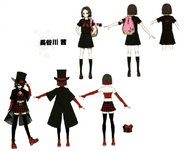 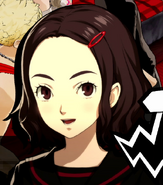 Akane's room
Add a photo to this gallery

Retrieved from "https://megamitensei.fandom.com/wiki/Akane_Hasegawa?oldid=393084"
Community content is available under CC-BY-SA unless otherwise noted.