Cassandra Lee Morris
Aika Nakamura is an anime-only character in Persona 4 The Animation.

Aika is a short girl, having pale skin, brown eyes and navy blue hair. Part of her hair is braided and adorned with a hair-clip with a Chinese design. She is most often seen wearing her working clothes which consist of a white shirt with a matching white skirt, a headscarf of the same color, and black sandals. Additionally, she wears a deep red apron in order to avoid getting dirty.

As a student of Yasogami High School, Aika also wears the standard uniform for girls of said school. At the summer festival she wears a purple kimono with a red sash.

Personality-wise, Aika is stoic and calm. She doesn't talk much and gives off an emotionless impression to most people. In the English dub, she sounds a little more expressive.

Aika is occasionally mentioned in-game by the owner of Aiya Restaurant if the protagonist undergoes the Rainy Day Mega Beef Bowl Challenge. Aika herself, however, is not seen. The owner always attributes it to her being out on deliveries.

Aika makes occasional appearances in the animated version of the game, mostly as a background character: she was seen briefly in Yu's classroom and in the halls of Yasogami High. After Kou and his team win the basketball match, she appears again during the party at Aiya's, serving food and drinks to the people affiliated with the basketball club. She reappears once more while the gang is observing Kanji, delivering the food Chie ordered. Aika is then seen again during the school camp and shares her nikudon with the Investigation Team. Other appearances include:

Aika is seen feeding the Fox at the Tatsuhime Shrine. In September, she reappeared delivering ramen to the Investigation Team and she gave them some information about the wooden comb, saying that they should show it to Master Daidara at his shop.

Although she doesn't appear in the storyline, Aika was mentioned by Chie in her gag ending.

Aika as she appears in the Visual Complete artbook

Delivery at the summer festival

Aika notices the hole in the sky moving 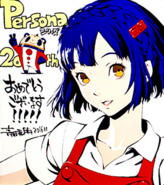