watch 03:41
Wiki Targeted (Games)
Do you like this video?
Play Sound

Tower
"Amuse me with your strength, evil one, before eternal silence is upon us."
—Ahriman, Shin Megami Tensei III: Nocturne

Ahriman, also known as Angra Mainyu, is a demon in the series.

Ahriman ("Evil spirit"), known in the Avesta as Angra Mainyu and in Sogdian texts as Šimnu, is the chief evil spirit in Zoroastrianism, comparable to the Christian concept of the devil or Satan. He's the antithesis of Ahura Mazda, the head of the Zoroastrian pantheon. He's also known under titles such as "the daēva of daēvas" and Ganāk Mēnōg ("foul-smelling spirit").[1] His name was often written upside down as a sign of disgust and hatred.

In the Gathas, the oldest Zoroastrian texts, Ahriman isn't the antithesis of Ahura Mazda himself, but merely of Spənta Mainyu, the "creative spirit." However, most historical texts outright make him an evil counterpart of god. To counter Ahura Mazda's creations, he created vices, illnesses and various demons and monsters, such as the dragon Dahaka. The Bundahishn, a Pahlavi text about cosmology, states that the demons were created because Ahriman feared the forces of good due to their superior power. Many medieval Zoroastrian theologians believed that despite the fearsome nature of his creations, he's doomed to fail simply due to his stupidity, and the grand conflict between light and darkness is ultimately a trap which will eventually render him powerless.

He's said to dwell either in the north, a direction commonly associated with demons in Zoroastrianism, or simply in the underworld. Rare artistic depictions of Ahriman tend to give him a humanlike form. In legends, Ahriman often disguises himself as a human; for example, in the tale of Dahaka, he appears in the court of the evil king first as an advisor, then a cook and finally a physician.

According to the Denkard, a medieval Zoroastrian compendium, Ahriman "has never been and will never be" and his evil is only temporary. This eventually lead to the view that he's simply an allegory of evil thoughts and deeds of humans rather than a specific singular supernatural figure. From the 19th century onwards this idea became the mainstream view among Zoroastrians.[2]

In Zurvanism, an extinct school of Zoroastrianism focused on Zurvan, Ahriman and Ahura Mazda were believed to be twin brothers. Additionally, at least some adherents of Zurvanism believed Ahriman is evil by choice rather than by innate nature, and in theory capable of creating good. Other sources documenting this tradition state that Ahriman was born from Zurvan's doubts. The notion of the two spirits being siblings was condemned in the Denkard as heretical.

Ahriman was also a part of the elaborate theology of Manichaeism, which stated that the human body was formed out of Ahriman's darkness, but the soul out of Ahura Mazda's light.

Angra Mainyu appears as a mini-boss in the upper floors of the school. He can also be obtained in a special fusion involving Fury Chernobog and Deity Belobog.

Ahriman is the Demonic Sponsor of Hikawa, promoting the Reason of Shijima. He is summoned within the heights of the Diet Building, as a member of the Tyrant Race. If the Demi-fiend's ideals differ from Shijima, he must fight and kill Ahriman to continue up the Tower of Kagutsuchi. If the Demi-fiend follows Shijima himself, Ahriman lets him pass without conflict, giving him the Earthstone key item as a token of good will. If fought, Ahriman is introduced as a boss with special battle conditions, in that he demands to be "amused" before killing the Demi-fiend. He will randomly forbid the use of specific actions, such as physical attacks, item usage, demon summoning and so on, instantly killing whichever character failed to respect these limitations with his signature move Hell's Call.

However, after a certain amount of damage, he will lose himself to the blood-lust and deploy his full offensive capabilities, releasing his tentacles from their bindings and using them as whips and piercing weapons. During the second phase, he will lose the ability to restrict the party's actions, but will instead gain a destructive Almighty-type move, Apocalypse. When Ahriman dies, at the top of its head, Hikawa will acknowledge his defeat and regret his vision of the world of Shijima would not come to pass, passing into the silent realm of the dead.

Angra Mainyu is the final boss of the Neutral route of the game. After clearing both the Amnesia and Paranoia maps, the protagonist will be sent back to Megapolis where they will engage a large number of demons and humans under his control. Angra Mainyu himself is extremely weak to Ice, so several Bufudyne spells or Ice element related skills should finish him off rather quickly. It is suggested that no demons who fly face him due to the Vile race's affinity that makes them extremely effective against aerial foes.

While not seen directly, Ahriman is referenced through the spell "240,000,000 Evils," which unleashes his power to inflict Almighty damage to all Neutral aligned demons.

Angra Mainu appears as an enemy in the Extra Dungeon as one of the highest leveled demons in the game. He can only be encountered in class 3-A.

In the additional PSP scenario, Angra Mainu resides in the Tower of Ethics that is part of the Kadath Mandala. He is surprised to see humans in this world and recalls that 25,940 days have passed since he last met Randolph Carter. He asks the party if there is such a thing as unwavering goodness. He approves of all their answers and tells them that goodness and wickedness are relative concepts, not limitless. Nevertheless, rivalry is necessary to explain things that are connected. If he, the one who owns the Trapezohedron of Ethics is evil, then they too, the ones who wish for it, are evil. Throughout history, the destruction of antagonistic peoples and countries has been encouraged in the name of gods as a good thing. Is this a virtue?

Katsuya answers his question correctly: If there is no good and evil then Angra Mainyu would not exist. Thus without the boundary between the two neither could Ahura Mazda. He then gives them the Trapezohedron of Ethics.

Angra Mainyu as he appears in Persona 2: Eternal Punishment 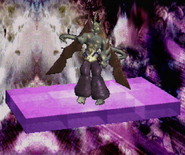 Retrieved from "https://megamitensei.fandom.com/wiki/Ahriman?oldid=413761"
Community content is available under CC-BY-SA unless otherwise noted.