Agni is a demon in the series.

Agni is one of the most important of the Hindu and/or Vedic gods, being the god of fire, receiver of sacrifices and the messenger of the gods. Agni lives in everyone's hearth. Being the vital spark of life itself, his importance was so great to the Proto-Aryans that he had over 200 hymns ascribed to him in the Rig Veda, along with eight of its ten books starting with praise towards him. Agni is closely associated with Indra, sometimes there being descriptions stating that they're twin brothers, thus sometimes making Dyaus and Prithivi his parents; however, it's stated that he has many more parents.

Whenever a description of Agni is given, he always has two faces. He has seven fiery tongues with sharpened golden teeth. He has red skin, wild black hair and black eyes. He has seven arms and three legs, and seven rays of light emanate from his body, and either rides on a ram, or on a chariot, pulled by goats or sometimes parrots.

Agni adores and loves all his worshipers equally, visits anyone's hearth no matter the caste, and is the mediator between the gods and men. The directions of various offering had different meanings, such as East being used to sacrifice to the gods, and South being for sacrifices to the spirits of the dead. The proper offering to Agni, and hence all the gods, is ghee, which is clarified butter. Agni also had the power to impart immortality on mortals, as well as remove all sins at the time of one's death.

Later on, the worship of Agni faded, becoming revered as an aspect of Brahma, Rudra or Shiva, an expression of his divine fire. Much more later on, he's only called upon by lovers, or by men who seek to increase their virility.

"Origin: India. One of the main Deva gods of Hindu lore. He is the embodiment of fire, said to have three heads and three or seven arms. Offerings to him are burned, and he carries them to the gods through the smoke."
—Shin Megami Tensei A-Mode DDS dictionary

"Not so much a demon as a huge receptacle that houses immeasurable power."
—Demonary, DemiKids

Agni is the ruler of the human world Rem in the future. He is viewed as a tyrant by the demons and humans who live there. He fights Akira and is impressed by his strength, he reveals after his defeat that his real reason for challenging Akira is to see if he had what it takes to save the world. He begs Akira to save the future and bring salvation to the demons and humans who live there before he dies. Agni can perform the combo Fire Flare with Vrtra.

Agni is one of the demons given as a prize for beating Eligor's quiz in Fire Book.

Agni appears as Heat's Atma Avatar, with his stat spread and starting Mantra geared towards a Physical build.

Agni remains as Heat's avatar, however he fights against the party when they finally find him.

The initial encounter with him begins with a group of four Karma Soldiers which can easily be dispatched with multi-target elemental spells. After their demise, Agni joins the battle along with two Gdon. All are weak to Ice, but the Gdon will cast Ice Drain to cover this weakness, leaving Heat free to assault the party. If Serph is in the party while facing him, he will generally focus all of his attacks on him, and if the Void Fire spell is used, he will lose press turns. After the Gdons are dispatched, his weakness will be wide open for the party to exploit. However, he will instead use Power Charge, Skull Cleave, and Chi Blast if Serph is swapped out of the party. He can also use Maragidyne as a combo attack with a Gdon.

Later, Agni's heads become the end of each tentacle of Vritra, Heat's new Atma Avatar when he fuses himself with the communication core of the EGG Installation.

"The god of fire in Hindu lore and also Buddhism. One of the most important gods depicted in the Rigveda, the collection of Vedic Sanskrit hymns originating in ancient India. He is the embodiment of fire, said to carry offerings to the gods through smoke, give testimony and even become the witness to weddings. He is the intermediary between the realm of the gods and human world."
—Shin Megami Tensei: Liberation Dx2 compendium 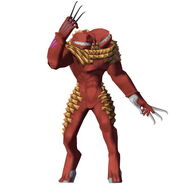