Aeros is a demon in the series.

Aeros is likely based on Air Elementals, elementals formed from the element of air, or spirits of wind. An Air Elemental controls one of the four prime elements that compose the world. It is a fusion of "heat" and "moist" essences, forming the basis for an exponential energy increase.

In some sources, Air Elementals were said to be worshipped as gods of wind at times, but others believe them to be diffused Sylphs.

"Origin: Worldwide. A wind spirit. Aeros is worshipped as a god of wind at times, but some believe it to be a diffused Sylph."
—Shin Megami Tensei A-Mode DDS dictionary

Along with the other elementals, Aeros can be encountered in the Amala Network and the Amala Temple, but cannot be recruited. To obtain one as a minion, the Demi-fiend must fuse the appropriate demons of the same race (Fairy, Divine, Beast, Wilder) or get one in exchange for gems at Rag's Jewelry in Ginza.

"The name given to elementals who represent the power of wind, one of the Four Elements. Aeros are also said to embody the scattered essence of Sylph, a well-known wind spirit."
—Shin Megami Tensei IMAGINE compendium

Aeros appears as one of the bosses in the gold instance of Suginami Tunnels, as well as the Suginami Unknown boss rush and Makai Distortion instance.

"This low-level wind elemental controls one of the four prime elements that compose the world. It is a fusion of "heat" and "moist" essences, forming the basis for an exponential energy increase."
—Shin Megami Tensei: Strange Journey compendium

Aeros must be fused by Flynn in the Cathedral of Shadows by fusing two members of the Raptor, Fairy, Divine, Spirit or Yoma races together. It is a source of the Shibaboo skill for Flynn and it can be used as fusion material to pass the Force Pleroma or Mana Bonus passive skills on to demons that would benefit from them. Aeros is needed in order to summon Oread through special fusion.

Aeros must be fused in the Cathedral of Shadows by Nanashi. It can teach Nanashi the Shibaboo skill through its Demon Whisper or be used to pass on the Force Pleroma or Mana Bonus passive skills. Aeros benefits from learning Force and ailment skills. 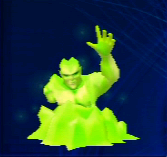 Aeros as it appears in Shin Megami Tensei NINE

Aeros as it appears in Shin Megami Tensei III: Nocturne

Aeros as it appears in Last Bible II

Aeros as it appears in Last Bible Special