Adramelech is a demon in the series.

Adramelech, also known as Adrammelech or Adramalek, was a demon in the form of a sun god, along with its sibling, Anamelech, as a moon god, the center of his worship was the town of Sepharvaim and was brought by the Sepharvite colonists into Samaria. Like other pagan gods, Adramelech is considered a demon in Judeo-Christian tradition. According to Collin de Plancy's book on demonology, Adramelech became the president of the senate of the demons.

He is also the grand chancellor of Hell and supervisor of Satan/Lucifer's wardrobe. He is also the eighth of the ten evil Sephiroth, the chancellor of the Order of the Fly, founded by Beelzebub and president of the high council of devils. Adramelech was generally depicted with a human torso and head, and the rest of the body of a mule or peacock.

In classic literature, Adramelech is a fallen angel, vanquished by Uriel and Raphael, in Milton's Paradise Lost. A poet's description of Adramelech can be found in Robert Silverberg's short story "Basileus." Adramelech is described as "The enemy of God, greater in ambition, guile and mischief than Satan. A fiend more curst — a deeper hypocrite."

"Chancellor of Hell and supervisor of Lucifer's wardrobe. Has the body of a mule and the plumage of a peacock. Worshipped by the Ayssrians sic, who sometimes offered children to him as a sacrifice."
—Shin Megami Tensei IV Apocalypse compendium

Adramelech is the first boss of the game, appearing before Nanashi, Nikkari, Manabu and Asahi. Having been ordered to purge Tokyo clean of the weak by Lucifer, he attacks with a horde of Fallen demons. During the fight he kills Manabu with his fire magic and finishes Nikkari afterwards. He kills Nanashi only for him to be revived by Dagda and fight back. His horde is killed in the second fight, but he retreats before he could be killed.

He appears alongside a Power on Lucifer's orders to help Nanashi oppose Shesha in the first fight against the serpent. Adramelech is later fought in front of Tsukiji Konganji, where he dies in their final encounter. During the battle, Nanashi can make various choices affecting the flow of the battle.

During the battle, Adramelech will typically be using Madness Nails and Hellish Brand to inflict damage. Demons with a resistance that Nullifies, Drains or Repels Fire damage will not be affected by Hellish Brand's damage or buff removal. Nanashi can also enjoy this benefit by wearing the Pyro Coat body armor that can be obtained in Shibuya. When Adramelech starts getting low on HP, he will begin using Eat Whole to recover some HP from the attacks. An Attack Mirror or Tetrakarn can cause him to waste his turns. While Adramelech can be debuffed, he will use Dekunda at some points to return his status to normal.

After defeating him for good, Adramelech is unlocked for fusion in the Cathedral of Shadows. A special fusion of Tonatiuh, Kelpie and Murmur will summon him. Adramelech can teach Nanashi the Madness Nails and Eat Whole skills through his Demon Whisper, but his Hellish Brand skill cannot be passed on in any way. He benefits from learning Fire and Physical skills.

"Chancellor of Hell and supervisor of Satan's wardrobe. He has the body of a mule, though he may also sometimes appear as a peacock.
He was worshiped by the Assyrians, who occasionally offered him children as sacrifice."
—Shin Megami Tensei V lore

One Adramelech can be found in Da'at: Daito in Umayabashi. He has gotten in a quarrel with Futsunushi and requests the protagonist handle him, starting "The Raid on Tokyo" quest. If the protagonist chooses to aid Adramelech, he will join their party once the quest is finished. If they side with Futsunushi, Adramelech will fight them but lose, accusing Futsunushi of hypocrisy and claims that he has won the battle of ideals before leaving.

Adramelech can be found as a common enemy in the Temple of Eternity.

If Adramelech is in the protagonist's party while fighting an enemy Yurlungur, he will find the snake's hide outstanding and offers to showcase the beauty to his lord. Yurlungur initially accepts but attacks when it realizes that he intends to kill it for the hide.

As with the previous game, Adramelech comes with his signature skill Hellish Brand, a powerful fire attack that hits all enemies and removes any active buffs they might have and benefits from learning Fire skills. He is also one of the three demons required for a special fusion for Abdiel's Herald form.

"A god with a lion body and eagle wings, known as "King of Fire." He was workshipped in Assyria and neighboring regions, and in the city of Sepharvaim an altar was erected to him where children were sometimes sacrificed. According to one theory, he is the Lord Chancellor of hell as well as president of the Senate of demons. When summoned by a human, he will appear either with the form of a human, a peacock, or a mule. In modern times, he's considered a demon."
—Persona World 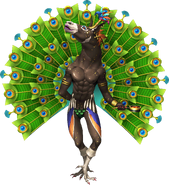