Adam Kadmon is a Persona in Persona 5 Royal.

Adam Kadmon is the original man in the teachings of Kabbalah, untainted by earthly matter. He stands in contrast to the Adam of Eden, who was made from earthly clay. He was the perfect prototype man made by Ein Sof, with the Kabbalists taking this concept to describe the divine symbolism of the human body. In later teachings, Adam Kadmon came about to personify the messiah, with Adam Beliyya'al' being his contrast as the devil. He is symbolized by the Sefirot, which are the Ten Circles of Creation in the Kabbalah.

Adam Kadmon is the ultimate Persona of Takuto Maruki, awakened after the remains of Azathoth were fused with his Palace's Treasure, acting as the final boss of the game (gameplay-wise however, Azathoth is the actual final boss). It manifests as a gigantic robot even larger than Satanael in height with a brilliant golden exterior, with green outlines resembling bared-out human skeletal features being fully visible from its face, limb joints, chest and back. On its chest are the sun/flower symbols seen frequently on the decor of Maruki's Palace. It supports Maruki in combat through the use of Almighty attacks. Unlike most other Personas, Adam Kadmon appears to be autonomous and acts as a separate entity from its owner.

Once Maruki is defeated, he will briefly converse with Adam, remarking that "[it] thinks the same thing" as he is lifted onto the Persona's palm. Takuto then is absorbed into Adam's innards, and allows himself to be linked to its insides (consisting of Azathoth's tendrils), enabling it to take control of him and become greatly empowered. Adam’s lights will shift to a dark red and it, now sharing its voice with Maruki, will make an I am thou vow before engaging the party. Uniquely, Maruki is the one making the contract instead of Adam.

In the second phase of the battle, Adam will become nigh-impervious to all forms of attack, and repeatedly strike the ground with Full Force to deal enormous damage; however, as the fight is scripted, it will never be able to kill any of the party members. Once enough turns pass, Futaba will locate Adam Kadmon's weakness: it is invincible until it enters its attack position, during which it will lower its defenses to concentrate energy in its fist. With this information, the party stalls Adam Kadmon's attack by guarding against it with their Personas' strength while the protagonist uses his grappling hook to swing onto its head and fire the decisive shot, destroying Maruki's mask and dispelling Adam Kadmon.

Maruki continues using one of the remains of his cognition control device to stop the Monacopter from leaving his Palace, and to pull down the protagonist so he could vent one last time even after Adam Kadmon is defeated. He loses the ability to summon his Persona shortly thereafter due to the Metaverse being on the verge of collapse, forcing both the protagonist and Maruki to fight hand-to-hand. 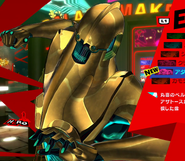