Abraxas is a demon in the series.

Abraxas, also known as Abrasax Abraxis or Latin-Afipacrdl, is an Aeon, a divine being residing in the Pleroma in Gnosticism. In a great majority of instances the name Abrasax is associated with a singular composite figure, having a Chimera-like appearance somewhat resembling a basilisk or the Greek primordial god Chronos (not to be confused with the Greek titan Cronus).

Abraxas is described as a fat-bellied character with the head of a lion or a cock, sometimes crowned, with a dragon's tail, and serpents instead of legs. He also carries a whip in his hand. The Gnostics, a sect of the 2nd century, claimed Abraxas as their supreme god, and said that Jesus Christ was only a phantom sent to earth by him. They believed that his name contained great mysteries, as it was composed of the seven Greek letters that formed the number 365, which is also number of days in a year. Abraxas, they thought, had under his command 365 gods, to whom they attributed 365 virtues, one for each day.

According to E. A. Wallis Budge, "as a Pantheus, i.e. All-God, he appears on the amulets with the head of a cock (Phœbus) or of a lion (Ra or Mithras), the body of a man, and his legs are serpents which terminate in scorpions, types of the Agathodaimon. In his right hand he grasps a club, or a flail, and in his left is a round or oval shield." This form was also referred to as the Anguipede. Budge surmised that Abrasax was "a form of the Adam Kadmon of the Kabbalists and the Primal Man whom God made in His own image". Some theorize that he is an Egyptian god, but there seems to be no evidence of this.

Abraxas was implemented in October 2015 as part of the Die is Cast questline. It can be made in special double-fusion of Mithra and Basilisk.

"A fallen angel with the head of a rooster and the lower half of a snake. It wields a flail and shield. It was originally the ultimate entity in Gnosticism, but eventually came to be regarded as a fallen angel in Christian lore. He created the physical world, but on the day of judgement, this too will vanish. His figure is often carved into gems and stones as charms known as Abraxas Stones."
—Devil Survivor 2 compendium

"Originally the all mighty being in Gnosticism, was later regarded as a fallen angel in Christian Orthodoxy. Wielding a whip in one hand and a shield in the other he has the head of a rooster and the lower body of a snake. The physical world was created by Abraxas, but it is prophesized that on the day of judgement this too will disappear from existence. His figure is often carved into gems and stones as charms known as "Abraxas Stones.""
—Shin Megami Tensei: Liberation Dx2 Demonic Compendium

Abraxas as seen in Devil Survivor 2

Abraxas as it appears in Card Summoner 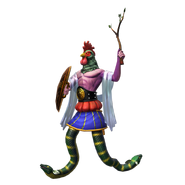