Devil Summoner
Onmyoji
Abe Seimei is a character in Raidou Kuzunoha vs. The Lone Marebito. He is a Devil Summoner, onmyoji, and the true antagonist.

Abe Seimei is a descendant of Abe no Seimei and like his ancestor, he practices onmyodo. He is also a Devil Summoner who works for the Yatagarasu and is sent by the crows to protect the same girl as Raidou, with the two first meeting at Raidou's school.

However, the truth is that he is the one behind the Lone Marebito project and has been trying to kidnap the girl they are meant to protect. He reveals his true role as the mastermind after faking being stabbed by Atavaka. It is revealed later that when he was a child he was murdered, but came back to life thanks to Clarion. The entity had changed him and infected him with the twisted philosophy of sacrificing the weak to protect the weak.

Despite having been infected by Clarion, he was able to resist most of its influence, only losing complete control when stabbed by Raidou. His eye is revealed to be the part of his body that came from Clarion and grows massive as it takes control of him. He sought to use the feelings of loneliness, superiority and misery that gave rise to poisonous magnetite to summon Clarion, turning one of his demons into Behemoth to be sacrificed in its summoning and bring what he believes is salvation to the world.

After his final defeat, his soul appears briefly to Raidou as the sun begins to come up. The two reach out for the other as Abe fades away.

Abe as a child

Abe and Raidou departing a train

Abe after his one sided fight against Radiou

Abe revealing himself as the mastermind 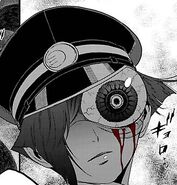 Abe after Clarion takes control
Add a photo to this gallery

Retrieved from "https://megamitensei.fandom.com/wiki/Abe_Seimei?oldid=392101"
Community content is available under CC-BY-SA unless otherwise noted.