Abaddon is a demon in the series.

Abaddon is a demon or angel that personified the abyss, becoming known as the "Angel of the Abyss." He is often depicted as a large, human-sized locust and leads a swarm of locusts and other insects that carry infectious diseases. In this respect, he is often associated with the swarms of locusts that sometimes destroy entire crop fields; in the The Greater Key of Solomon they were said to be called upon by Moses to cause the great rains during the Ten Plagues of Egypt.

Abaddon was originally a biblical term in Hebrew which means "place of destruction" and is a fiery plain in the realm of the dead, Gehenna. It wasn't until the Book of Revelation, in which Abaddon (Apollyon in Greek) was explicitly named as a leader of locusts appearing during the end times, be became an entity by himself.

Due to the lack of proper description of his nature in Revelation, Abaddon has been associated with many roles and identities, oftentimes contradictory. He has been identified as the "angel" of death and destruction, demon of the abyss, and chief of demons of the underworld hierarchy, where he is equated with Samael or Satan. Other depictions make him a righteous figure, charged with casting the devil down into the abyss and sealing him within.

In demonology, he is said to tempt people with sloth and discord. A few books claim he is the chief of demons of the seventh hierarchy, the king of the grasshoppers, or demon locusts (described as having the bodies of winged war-horses, the faces of humans, and the poisonous curved tails of scorpions). In occultism and esotericism, Abaddon is related to blood red, brown and green colors, winter, the month of January, Saturday, intuition, sacrifice and challenge, the ruby and the sword.

"Origin: Israel. Known as the destroyer of Revelation. He appears with the angels' trumpets on doomsday. His appearance is similar to locusts or a war horse. When the last judgement comes, he will release his locust familiars. Any human attacked by them will undergo pain and suffering beyond death for five months."
—Shin Megami Tensei A-Mode DDS dictionary

The Center of Tokyo Millennium used Abaddon (Michael claimed he would be restored as an angel for doing so) to swallow Valhalla. Later in the game, Aleph enters Abaddon's body and fights his heart after using Mekata's MAG Presser to reveal it.

Abaddon appears in Chapter 8. It attacks the Shibuya 109 Building in an attempt to obtain Desire Energy.

In the final RTS mission of the game, Kei Azuma, Baraki or Sumire, and a squad of Idea Angels lead by Tsuzumi hack into it and defeat it from the inside.

"The 'destroyer' and angel of the bottomless pit, as described in ancient scriptures. He controls locusts and, with them, causes massive destruction to villages."
—Shin Megami Tensei III: Nocturne compendium

Abaddon evolves into Aciel when it reaches level 74 or above.

Abaddon can be found as a random encounter in the higher floors of the Tower of Kagutsuchi or the depths of the Labyrinth of Amala. As he of the Tyrant race, he cannot be recruited.

Abaddon appeared in the Hush-A-Bye Devil battle during IMAGINE's 6th Anniversary event as the secret final event boss accessed through Door-666. Unlike the other event bosses, his endchest did not drop his summon PG and he has yet to be made available as a player demon through any means. In January of 2014, alternate Shinjuku Babel was added as a permanent zone, with Abaddon returning as a boss. He is one of the few enemies that has the ability to enter stealth mode mid-combat, allowing him to recover and prepare to emerge with a surprise attack. Like many of the alternate Babel bosses, he has two forms; the stronger form spawns after the first is defeated. The second form in Abaddon's case can either null all physical attacks at a high level or null all magical attacks at a high percentage, making a varied party for this instance important.

"The "destroyer" and angel of the bottomless pit, as described in ancient scriptures.
He controls locusts and uses them to lay waste to villages."
—Shin Megami Tensei: Strange Journey compendium

"The king of the abyss that appears in the Book of Revelations of the New Testament. He controls locusts and plagues. He leads the seventh order of demons who appear at the sounding of the fifth trumpet on Judgement Day, when he will bring a horde of locusts to make people suffer. His name in Hebrew means "destroyer" and "endless pit." It's thought that his origins lie in the deification of the natural disasters caused by locust swarms."
—Shin Megami Tensei IV compendium

Abaddon can be found in the Monochrome Forest within the Expanse. He can teach Flynn the Hades Blast skill through his Demon Whisper. Wild Hunt can evolve into Abaddon upon reaching level 58.

Abaddon also appears in the New Game Plus Challenge Quest, Help Me Exterminate the Demons. He appears as a red foe alongside the 18 Manticores in Shinjuku National Park that must be slain and is the demon said to be attacking them. Defeating him is optional.

Merkabah also refers to him in the Law ending, referencing both his role in Shin Megami Tensei II and his position as the Angel of the Abyss, when activating the Yamato Perpetual Reactor to create a black hole to swallow Tokyo.

One of the demons sent by Merkabah to retrieve Flynn from Nanashi in Tsukiji Konganji after the defeat of the Divine Powers, dying in battle. Abbadon can be evolved from Wild Hunt once it reaches level 59. It can also be found in the Firmament areas of the Sky Tower. Abaddon can teach Nanashi the Hades Blast, War Cry and Eat Whole skills through its Demon Whisper. It benefits from learning Physical, ailment, support and Fire Skills.

"The king of the abyss that appears in the Book of Revelation of the New Testament.
He controls locusts and plagues and leads the seventh order of demons who are set to appear at the sounding of the fifth trumpet on Judgement Day, when it is said that will bring horde of locusts to make the people suffer. His name in Hebrew means "destroyer" or "endless pit". It is thought that his origins lie in deification of the natural disasters caused by locust swarms."
—Shin Megami Tensei V lore

A Punishing Abaddon can be found in Ueno Park, being the target in the quest "Abaddon's Assault". He has been consuming cities and leaving behind a path of destruction in his wake; a group of Kurama Tengu attempted to stop him with little success. The protagonist, commissioned by the Kurama Tengu, arrives and defeats the rampaging demon.

Abaddon is one of the demons that drops a body part of the hero's girlfriend after their defeat.

Abaddon was first used against Shadow Naoto in an attempt to slow down and damage her. Abaddon shot Arrow Rain at her in this attempt but failed and missed every strike. Abbadon is the Persona that represents Yu and Shu Nakajima's bond.

In the True Ending special, Abaddon appears to attack Margaret's Loki using Arrow Rain, as well as bring a message of thanks from Shu to Yu.

"The "Destroyer" and "Angel of the Bottomless Pit," as described in ancient scriptures. He controls locusts and uses them to cause massive destruction to villages."
—Persona 5 background

Abaddon is the fourth Persona of the Judgement Arcana and can be found as a Shadow in the Depths of Mementos and the Qliphoth World, with the title "Abyssal King of Avarice." He is the third of four Personas that learn the Survival Trick skill and is the first Persona to learn the Drain Phys and Gigantomachia skills. He is the only Persona that naturally drains Physical and Gun skills. When Itemized in the Velvet Room, Abaddon yields a Makarakarn skill card.

In Royal, Abaddon is a Red Shadow found in the Depths of Mementos. It has no weaknesses.

Abaddon is a boss in Black Book. He attempts to strike down Setsuna Kai in his masters name, only for Cool to take the hit for him. Out of respect for his fellow demon, he decides to spare the Devil Child for now. He can later be recruited in the Pyramid.

Abaddon is one of the minions of Lucifer and is usually seen alongside Fenrir. The two demons are good friends and usually oversee the actions of the latest possessed demon. After Lucifer's defeat, the two begin working for Vibhishana, Paimon and Demogorgon until they learn Lucifer is still alive. The two of them then proceed to try to aid their master in his imprisoned crystal state.

"A ninja-demon cloaked in darkness. Few have seen him and lived to tell the tale."
—Demonary, DemiKids

Abaddon can perform the combo Shadow Break with Paimon, Death Blade with Lucifer, and Splash Ray with Rox.

Abaddon appears during the last encounter with the Tribhvana. Serph's party finds Tribhvana: Earth alone in a room with a bloody mouth in B13 of the EGG Installation. Upon Cielo questioning him about the whereabouts of his partners, Earth reveals that in a moment of twisted inspiration he devoured his comrades to gain strength. Angered by this, Cielo will force his way into the party for the confrontation with Abaddon. Cielo will occupy the 3rd to last slot during this fight but can be swapped away.

Abaddon has three 'forms' which fill the roles of all three Tribhvana members (physical attacks, magic and support) and will switch between them using the Bellow skill. He also gets a minimum of three turns per round. His resistances for each form are the same as each member of the Tribhvana. Low level spells will hardly damage Abaddon so learning Agilao, Zanma, Terazi and Diarama is recommended. Elemental Boosts will also help. Abaddon will actively try to target weaknesses during the magic phase so shield spells will also help.

One dangerous ability Abaddon has is to swallow a party member, leaving the party with fewer actions to take and if both members die before they are released it will be a game over. However, if there is only one member on the battlefield before swallowing, Abaddon won't swallow them and won't use Bellow.

"The king of the abyss that appears in the Revelations of the New Testament. He controls locusts and plagues.
He leads the seventh order of demons who appear at the sounding of the fifth trumpet on Judgement Day, when he will bring a horde of locusts to make people suffer. His name in Hebrew means "destroyer" and "endless pit." It's thought that his origins lie in deification of the natural disasters caused by locust swarms."
—Devil Survivor 2 compendium

"Lord of the abyss in the Book of Revelation, the source of evil and the cause of plagues. He leads the seventh order of demons who appear at the sounding of the fifth trumpet on Judgement Day, when he will command a horde of locusts wreaking havoc and suffering. His name means "destroyer" and "endless pit" and even considered the abyss itself."
—Shin Megami Tensei: Liberation Dx2 compendium 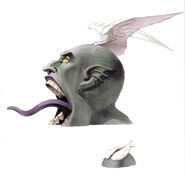 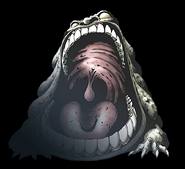 Abaddon as he appears in Persona 3

Abaddon in Persona 4 The Animation 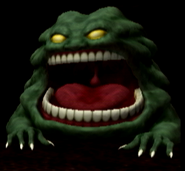 Abaddon as he appears in Shin Megami Tensei NINE

Abaddon as he appears in Shin Megami Tensei III: Nocturne

Abaddon as he appears in Shin Megami Tensei IMAGINE

Abaddon as he appears in Devil Survivor 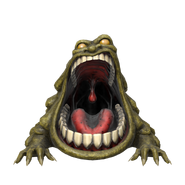 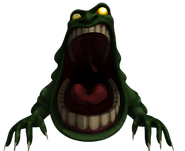 Abaddon as it appears in Persona Q: Shadow of the Labyrinth. 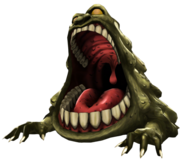