Majin Tensei
"As usual, the thick-headed Japanese politicians don't seem to understand the scope of what's really going on. How do they ever expect to be taken seriously as world leaders?"
—Étienne, First meeting the protagonist

Étienne Alphonse Laflèche is a supporting character in Majin Tensei.

Étienne has poor social skills and can come across as quite arrogant or brash when speaking his mind, such as heavily criticizing the Japanese government for their apparent "wait-and-see" approach to handling the demon infestation of Neider Tokyo. Though he does care about the feelings of others and apologizes to the protagonist and heroine as he remembers they are Japanese themselves. While he can be argumentative (such as the case with Minami), Étienne genuinely cares for those he considers his friends like the protagonist.

Étienne is first encountered by the protagonist and heroine as they clear out the demons infesting Neider Tokyo. He has heard numerous rumors of the protagonist's heroism and commends his efforts to rescue civilians. He introduces himself as Étienne Alphonse Laflèche. Étienne proceeds to draw a stark contrast between the protagonist's efforts and the Japanese government who he deems as being too slow to react and misunderstanding the situation's severity. He estimates that soon even more powerful demons will appear, and suggests the protagonist head towards Musashi Forest to ambush them, a course of action he intends to carry out likewise. Along the way, the protagonist's party clash with Minotaur's forces before reaching the woodlands.

The protagonist once again encounters Étienne who is impressed with the former's speedy travel and relates that he has discovered the earthquakes plaguing Neider Tokyo are a result of Yggdrasil: a base of operations the demons have built and are storing magnetite. Étienne requests the protagonist's party to destroy Yggdrasil as his hands are tied in other matters, apologizing for their short-lived reunion. After the destruction of Yggdrasil, Moloch appears before the party and boasts that the tyrants' plans haven't been hindered, and it is still possible to use the magnetite to summon Belial from the Expanse. However, the protagonist is able to slay Moloch before this occurs.

On the way to the Tower of the Crescent Moon, there is a route split the protagonist must choose between, one path will lead him to another encounter with Étienne. Étienne admits he doesn't fully know the motivations that drive the protagonist, but presumes they are tied with entering the Expanse, he explains the Tower of the Crescent Moon is the only way to enter the realm below from the surface, but cautions that it is near impossible to return.

Uriel laments that they must part from the protagonist as he states that the latter's path has differing goals and unavoidable consequences, and seals the Expanse from the surface for the sake of both humans and demons. He bids them farewell as global war reignites on the surface.

The protagonist and his companions find the terminal that connects the Expanse to the surface, but are unable to make it operational. The heroine, under the guise of operating the terminal's controls, begins sacrificing her life force to power the machine, stating she doesn’t care if she dies if it results in the protagonist being able to return home. Yet the protagonist is horrified by this and frantically pleads with her to stop, screaming he would rather remain in the Expanse alongside her than return to the human world alone, but his cries go unheard as she says goodbye.

The heroine, dying in the protagonist's arms, is relieved that he is unharmed. She begins to speak about her journey with the protagonist, grateful that she was able meet him and that even after learning she was a creature of the underworld, he treated her no differently than before. She states that even though she will die, she is happy as she is able to die a human thanks to him. A hysterical protagonist refuses to acknowledge her wounds, telling her not speak like it's over as the two of them are going to return home together. Even after she silently passes away, he continues to carry her body into the terminal connecting the Expanse to the surface. Against all odds, the Morning Star begins to radiate and the machine activates.

The protagonist then awakens in the human world beside Étienne. Étienne is glad the protagonist is awake and apologizes for the fate of the heroine, never imagining such a thing would happen. This only makes the protagonist snap at him, saying there is no need to apologize as there was nothing that he could do. Étienne, understanding the protagonist is stricken with grief, encourages him not to let himself be lost in despair. Étienne plans to return to France in the meantime now that the world is at peace, and asks the protagonist to come with him, but realizes that he needs time to grieve first. Étienne lets the protagonist know he considers him a true friend of his, and tells him to visit him once everything has settled.

Étienne is only mentioned in regards to an event, namely that he released cracked versions of DIO around the time of Global Economic Collapse under the moniker E.A. Laflèche. 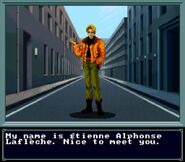 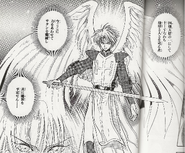 Étienne demonstrating his form as Uriel in True Remembrance

Étienne introducing himself to Atsuya and Toto in True Remembrance
Add a photo to this gallery
Retrieved from "https://megamitensei.fandom.com/wiki/Étienne_Alphonse_Laflèche?oldid=398315"
Community content is available under CC-BY-SA unless otherwise noted.