I just wanna say thanks to everyone who participated in my Persona 6 thing. Although the reception is like Space Jam 2’s, That’s not stopping me. I hold my idea for Persona 6 in a special place in my heart because I love persona and I wanted to be involved in the ideas of how those games come to life. I will never give up and not let bad feedback on my ideas stop me.

And one more time…Thank you 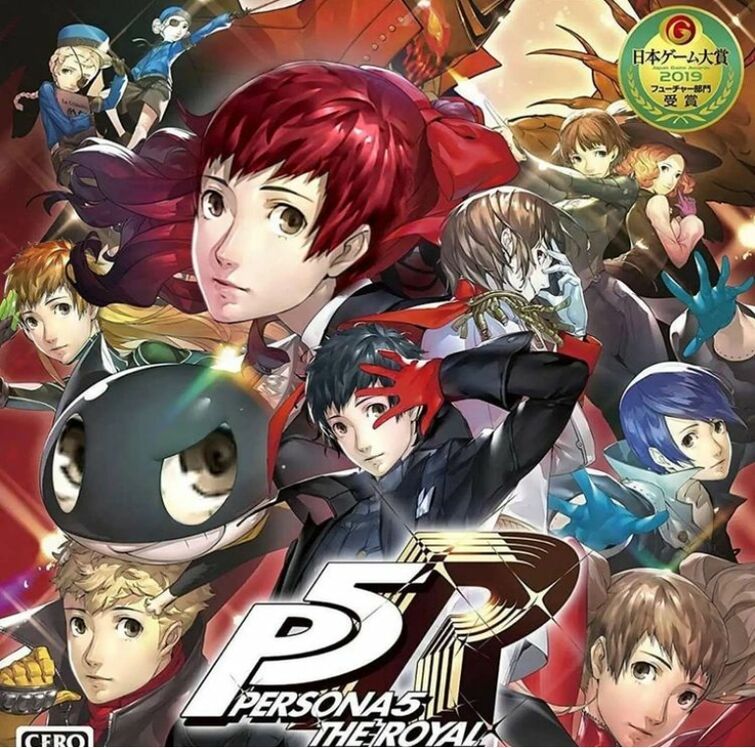 I know the Persona direct is tommorow so before Atlus probably destroys my dreams. Also I’ll post some poll posts to see your final thoughts. Hope the reception is positive. 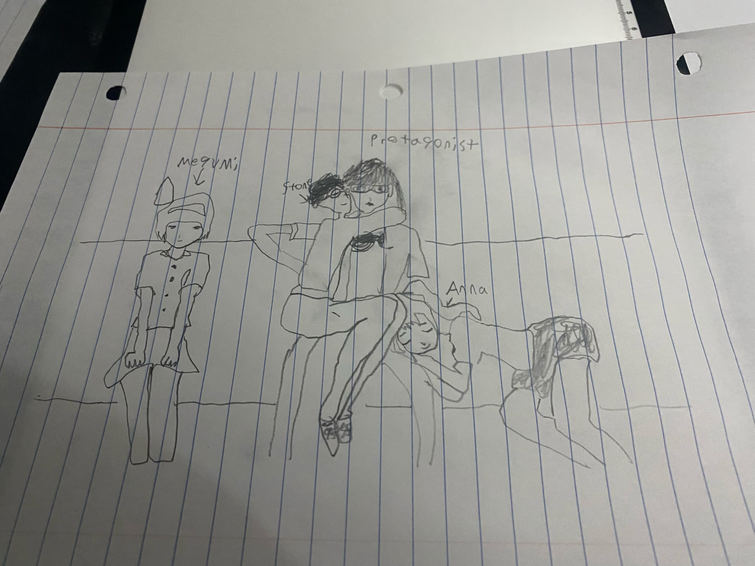 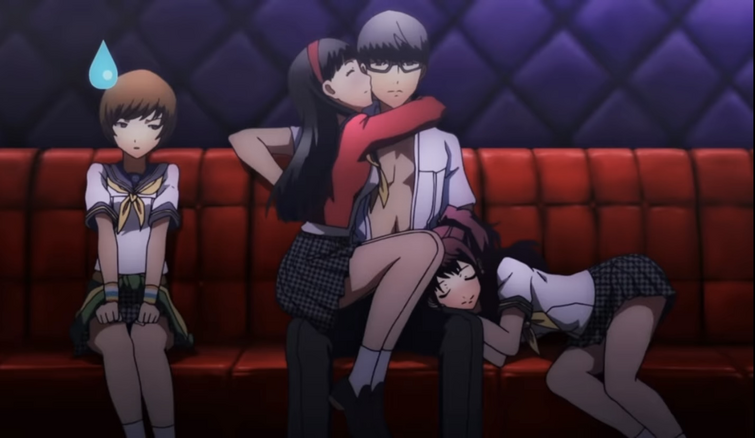 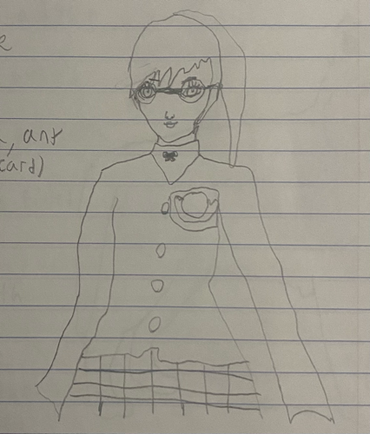 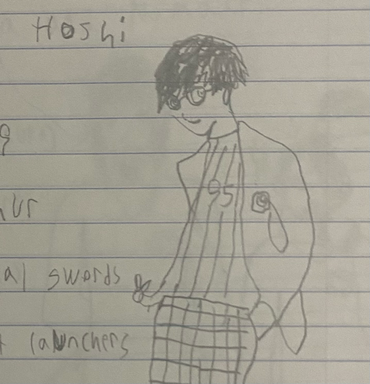 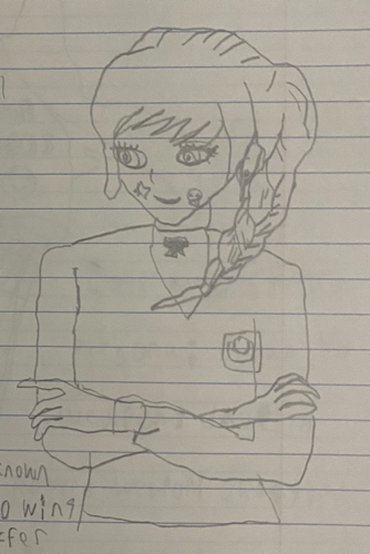 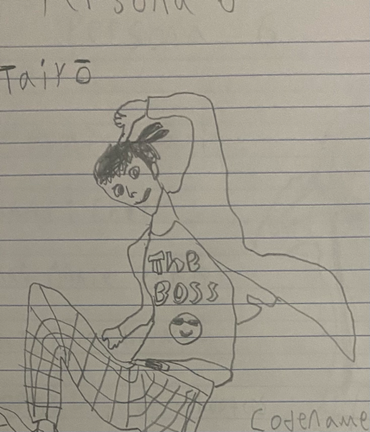 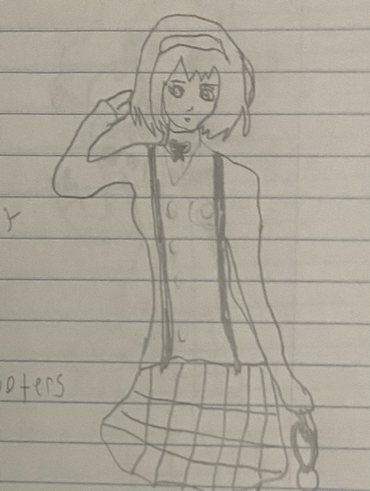 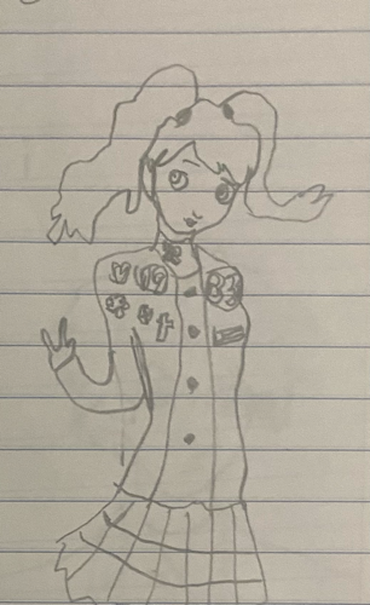 Yes
No
I don’t know
Give up and cry

The story starts with the Protagonist waking up on the train after having a flashback of being falsely arrested and sentenced to yearly probation then having have been transferred to Okinawa where she has to stay with her police officer aunt Aoi Kasagano and little cousin Kairi. Soon after getting accepted into Westbrook Academy and her luggage into the house, the Protagonist awakens in the Velvet Room (which takes the form of a train) where Igor tells her that a powerful threat will soon come and she must raise a team in order to overcome this “threat”. After the first day of school, the Protagonist meets Anna Walker and Ryu Taiyō who discuss a strange incident called “Psychotic Breakdowns”. The following night, the protagonist discovers an app which opens a portal which she pulls herself out of. The next morning, the Protagonist shows Anna and Ryu the app that send them to Dimension X (Cross) where they find the palace of their abusive gym teacher Hidoi Kyōshi which takes the form of a military base. The trio meet amnesiac husky Bucky and the Protagonist awakens her persona Elena.

When the protagonist and Ryu visit a second time, they and Bucky meet Aigis who seems to have no memory of the past three months. Later, Anna and Ryu awaken their personas and the heroes discover they can steal the emotional root of the palace aka “Treasure” to change the heart of Kyōshi which they succeed in. After a celebration, the group decide to continue with changing the hearts of the corrupt society they live in and bring back Aigis’s old team name S.E.E.S (Specialized Extracurricular Execution Squad). Soon they start going on a massive change-of-heart spree which are of a embezzling director; a villainous mob boss; a evil priest who brands people for the slightest of mistakes; and Megumi and Aika’s mother Tao Otani. As the numbers of members and popularity start to grow, so does the concerns of the Tao and detective sisters Asuka and Namaari who later join S.E.E.S during the Otani Arc.

S.E.E.S discover that Chief Kurai is planning to become president of Japan and later the World and decide to change his heart one last time. While they infiltrate the palace, S.E.E.S meet with Asuka who reveals herself to be behind the psychotic breakdowns and she says she did it to entertain herself and due to Namaari upstaging her in the Detective world. After being defeated the first time, in a desperate fit of rage, Asuka goes psychotic and summons the somehow resurrected Magatsu Izanagi and becomes the rumored Black Knight figure that multiple shadows mentioned earlier in the game.

Asuka is finally defeated and despite being encouraged by S.E.E.S to follow her true feelings, she refuses to continue being upstaged by Namaari and attempts to commit suicide by shooting herself in the head before a cognitive copy of her appears and the real Asuka sacrifices herself to save S.E.E.S. Then they make it to the treasure route and release a worldwide calling card which infuriates Kurai. S.E.E.S encounter Shadow Kurai which they fight and defeat. The change of heart is a success and S.E.E.S celebrate until Namaari betrays them and steals a coin that Asuka gave the protagonist before possibly dying.

S.E.E.S then attempt to fight Lucifer but to no avail until he banishes them back into the real world but Dimension X starts to merge with the Real World via Lucifer’s magic and piles of Shadows swallow S.E.E.S except for the Protagonist. Without the bonds of her friends, the Protagonist slowly starts to fade away due to the despair of loneliness until Margaret (The Velvet Room Attendant) slaps the Protagonist out of her trance and tells her that “no matter if the Protagonist wins or loses, she will never be alone no matter what” and gives her a crystal called “The crystal of truth”. Encouraged, the Protagonist fights Lucifer again but she places the crystal inside her wand, turning her into “the White Mage”, her wand becoming Excalibur, and the Protagonist awakening her Ultimate Persona, Morgan Le Fay.

The protagonist defeats Lucifer with Morgan Le Fay’s power and Excalibur’s “Myriad Truths Ver. 5”, Lucifer accepts his defeat and vows to never harm anyone again as he returns to slumber. S.E.E.S then are each granted a wish and are returned to the Real World as Dimension X and Bucky fade away. The team then promise to keep seeing each other and remain friends no matter what. The next few months pass by (And Bucky is revealed to be alive due to Igor granting him a second chance in life.) and the Protagonist is supposed to go home by decision and two different endings happen but either one ends with S.E.E.S still bonding.

If you choose to leave, S.E.E.S share a heartfelt and tearful goodbye as the protagonist boards the train home.

If you choose to stay, S.E.E.S share a group hug and the Protagonist starts a new life in Okinawa and S.E.E.S meets her parents while “Ocean Man” by Ween plays in the credits 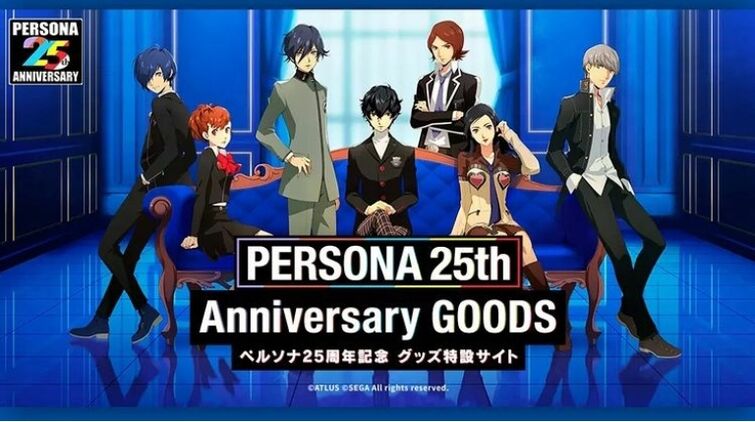 There are two more characters :D I’ll post the concept story on a later date or tonight 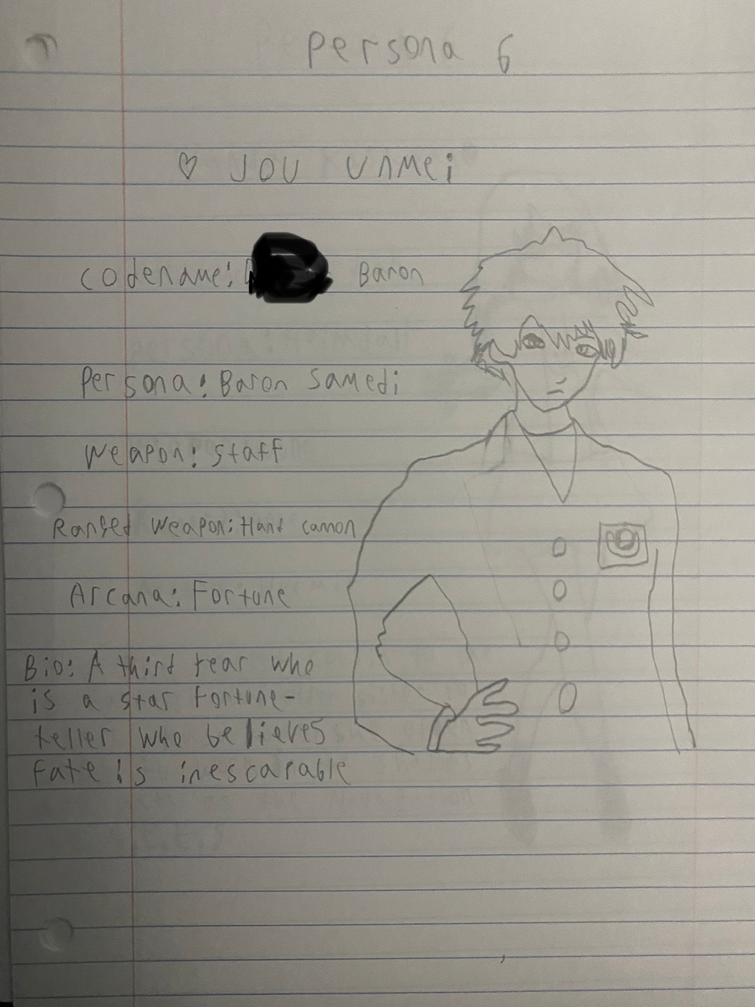 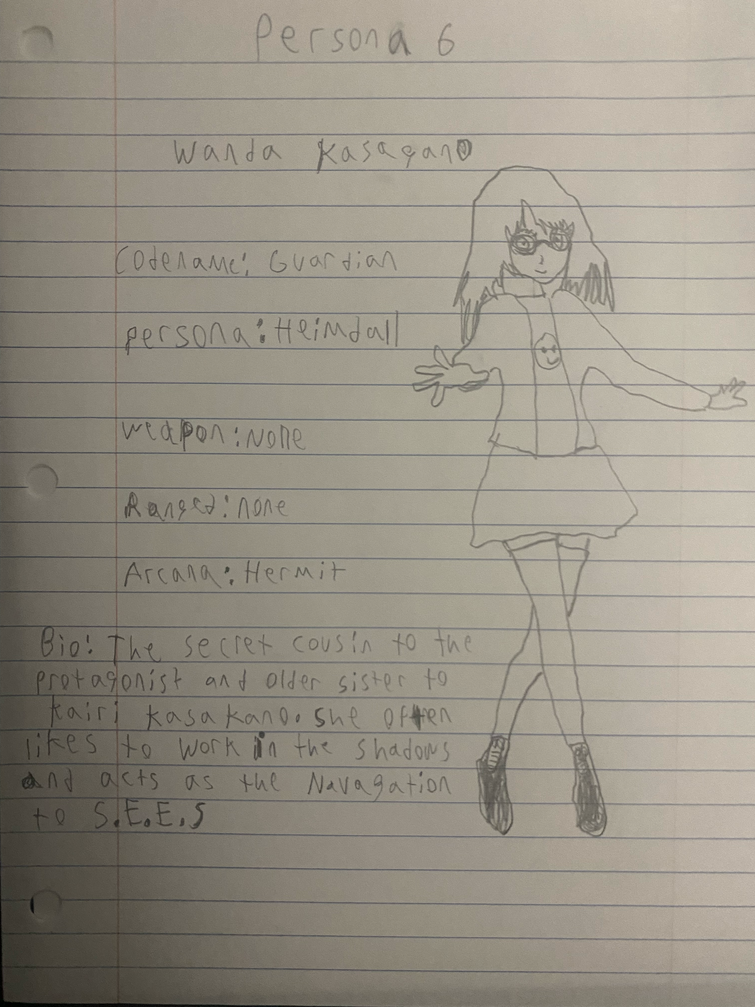 Heard somewhere that apparently it's officially confirmed that Robin Hood and Loki were awakened at the same time? No idea where the hell that guy's source was but they was sayin they can't make an official Akechi awakening because both happened at the same time and spoilers should be avoided or something

From how I see it, Akechi's personas represent lies and resentment (mistranslation issue), right? Based on Loki's design and, well, Loki himself, he's a trickster and a mischievous bastard, and Loki's pattern there is similar to battleship camouflage that was meant to confuse the enemy, so he represents lies. As it's already a battleSHIP camouflage, it's easy to believe that he awakened to this one after seeing Shido's palace, as part of his plan to lie to Shido. Robin Hood is a pretty obvious one, Robin Hood steals from the rich or aristocracy and gives to the poor. A symbol of resentment for the 'nobility' and, a hero. So I was under the impression Robin Hood was awakened first, and after discovering that talking to shadows in Mementos could alter their actions, offered to gather information on targets and to influence their actions. 'Til Shido told him to get Wakaba and start mental shutdowns.

Though I'm guessin it's entirely possible that his first metaverse experience was Shido's palace? He must've been aware beforehand Shido was his father and somehow got to the Diet Building, no idea how tho. Aw damn. Looks like I disproved myself.

Well next up on qualms about the translations: Akechi does not call his life trivial. What? Yeah. He says on the scene somethin along the lines of "Or is "this" all it takes to make your will bend to his?". He uses "kono teido" in Japanese which basically means like, "to this extent", and not trivial. So in a way, it is kind of implying that his life is trivial, but he doesn't say that directly. He isn't self-deprecating or anything like that. The choices of the protagonist are "It's not just 'this'" ("kono teido" ja nai) or "Don't say that so easily" or "My will won't bend". It's not "Don't oversimplify this!", so yeah. It really gives off a wrong impression in English because he calls his life b/s and trivial threat. 10/10 for pulling at the heartstrings, but yeah that's a little too far. Akechi ain't necessarily regarding his life as trivial, he's just saying that a choice between him and the true reality is something that shouldn't even be considered. Only holding him hostage is all it takes to make Akira doubt the decision? He doesn't directly insult his life. I'm betting it's more of a disappointed in your choices kinda thing. Well anyway. Go listen to the Japanese dub if ya want to understand better. It's pretty interesting how his personalities have slight differences in both languages, but no matter what it is, the voice actors were amazing and definitely brought out the intended message as great(ly?) as possible. They both cool. What the hell happened in this essay this fandom page is dead

Here are some more of the new characters. I’m thinking of a navigation member of S.E.E.S at the moment. Hope you like these drawings, especially a certain @ATQUEVALE 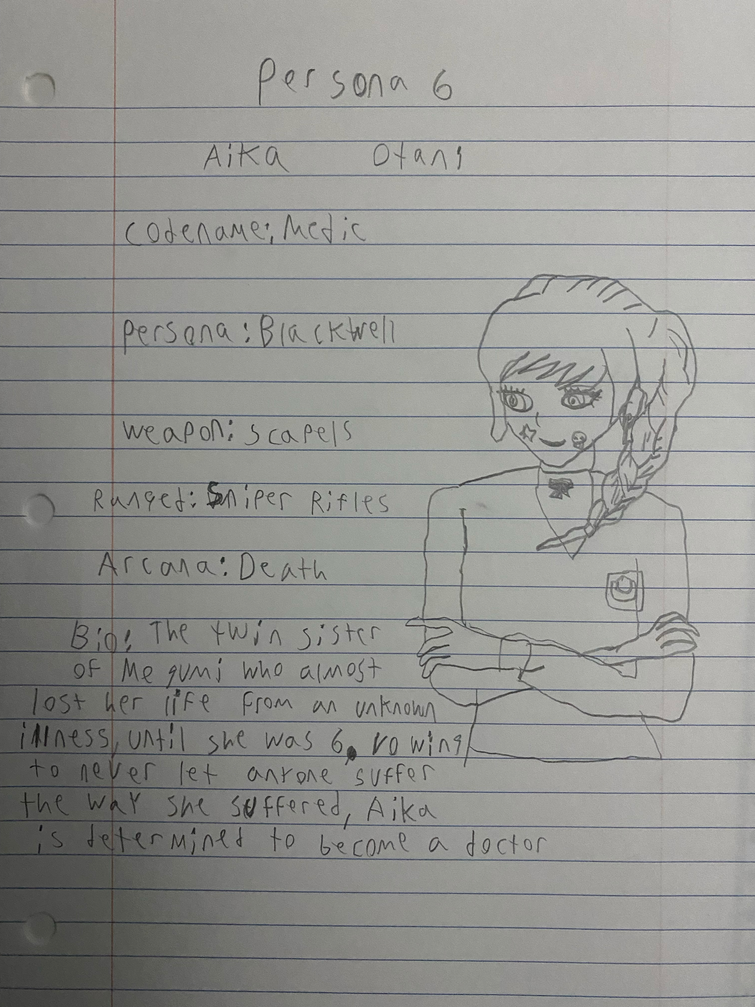 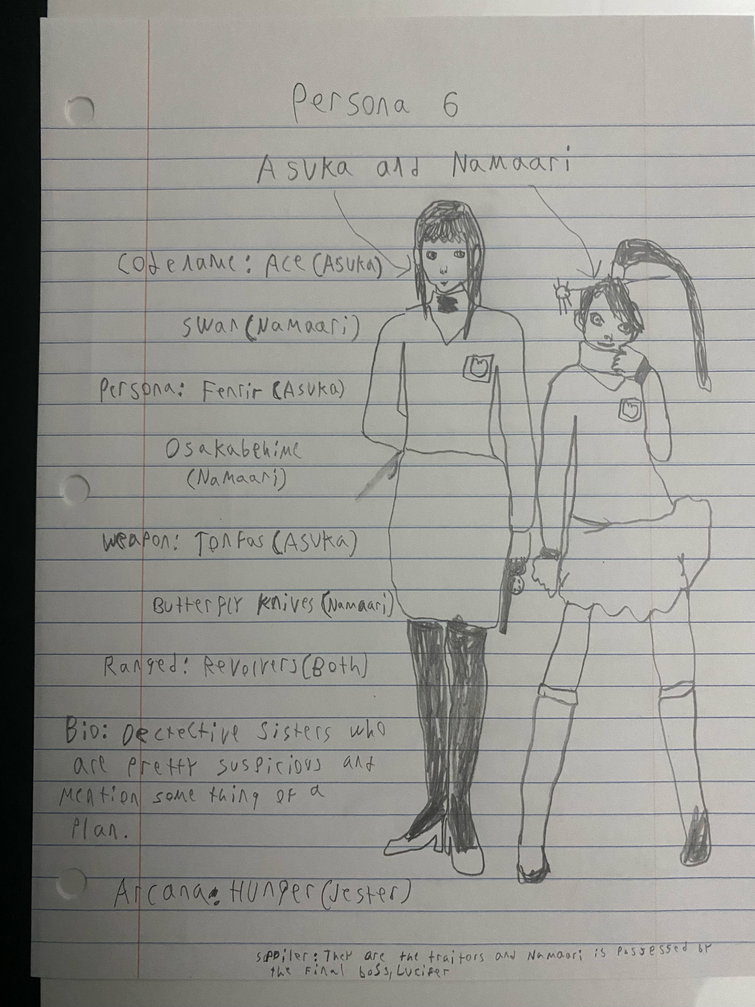 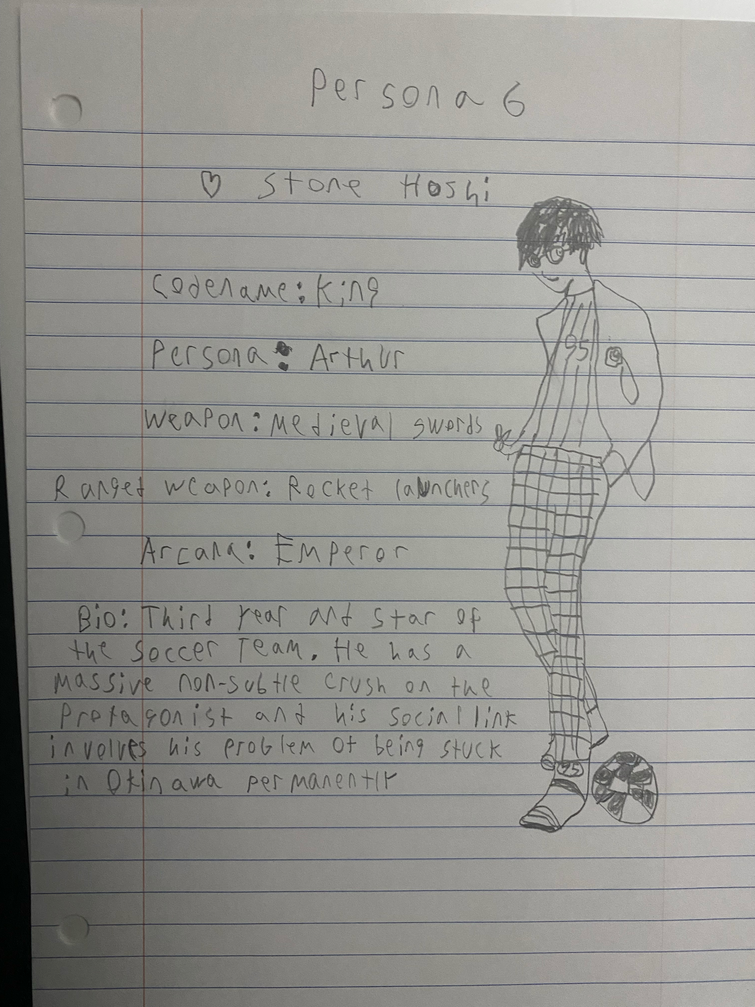 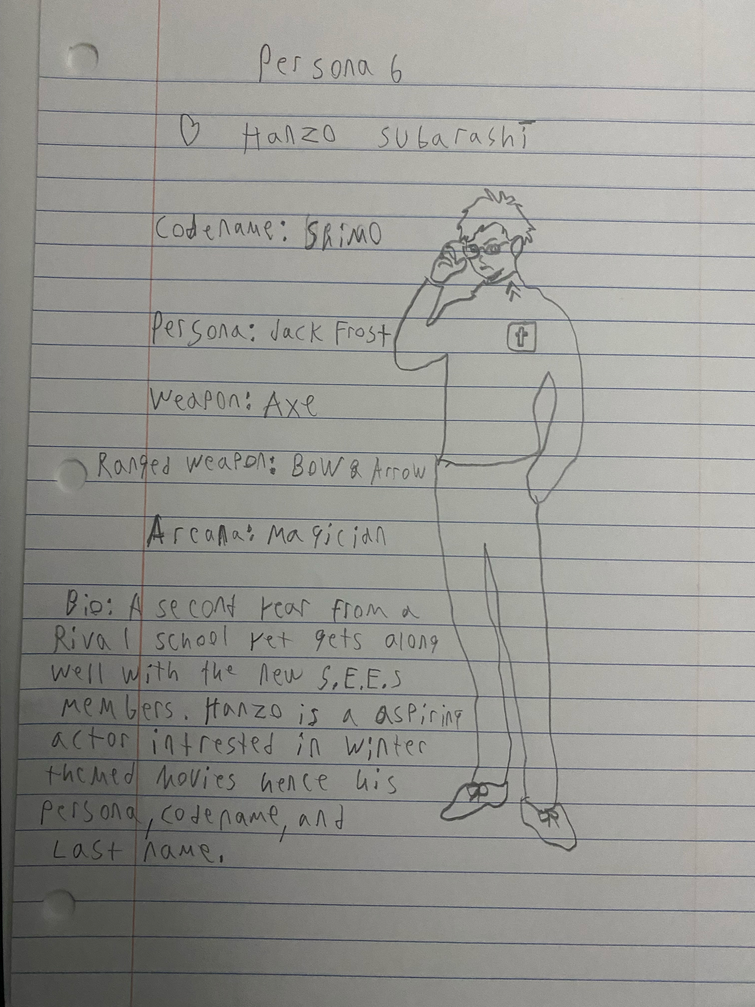 I really hope Atlus and you likes these designs. Also if you ask about if these drawings look like they’ve been traced with some edits, the answer is YES because I mostly specialize in tracing and you DO NOT wanna see what happens when I draw a person by myself… Ps: I have more characters in development and will draw them in their S.E.E.S suits 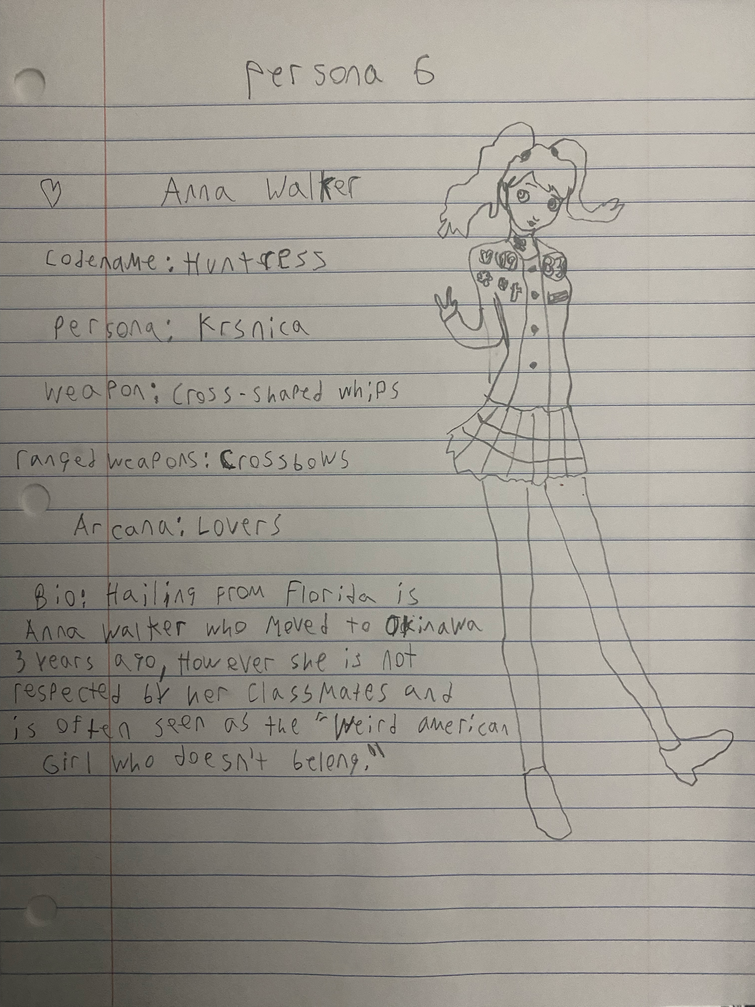 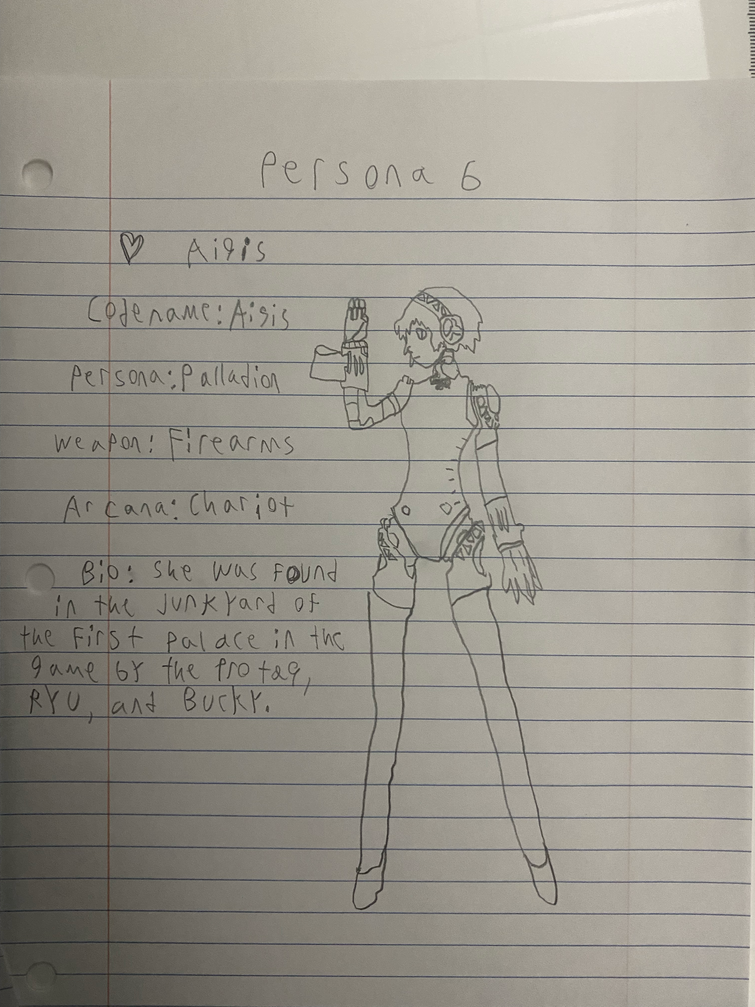 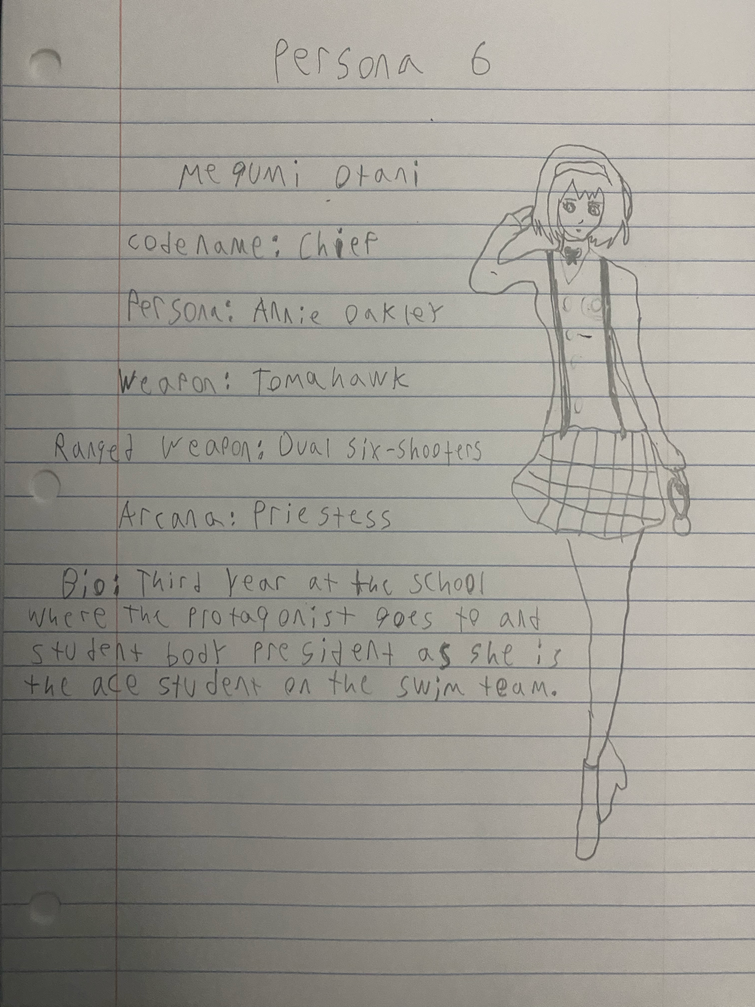 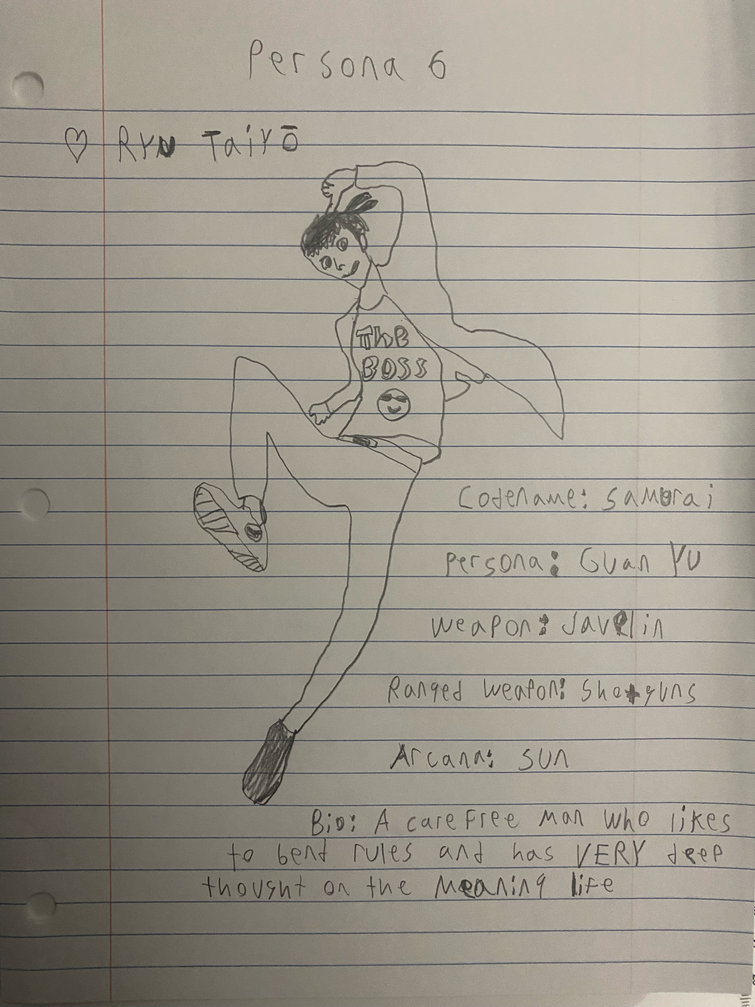 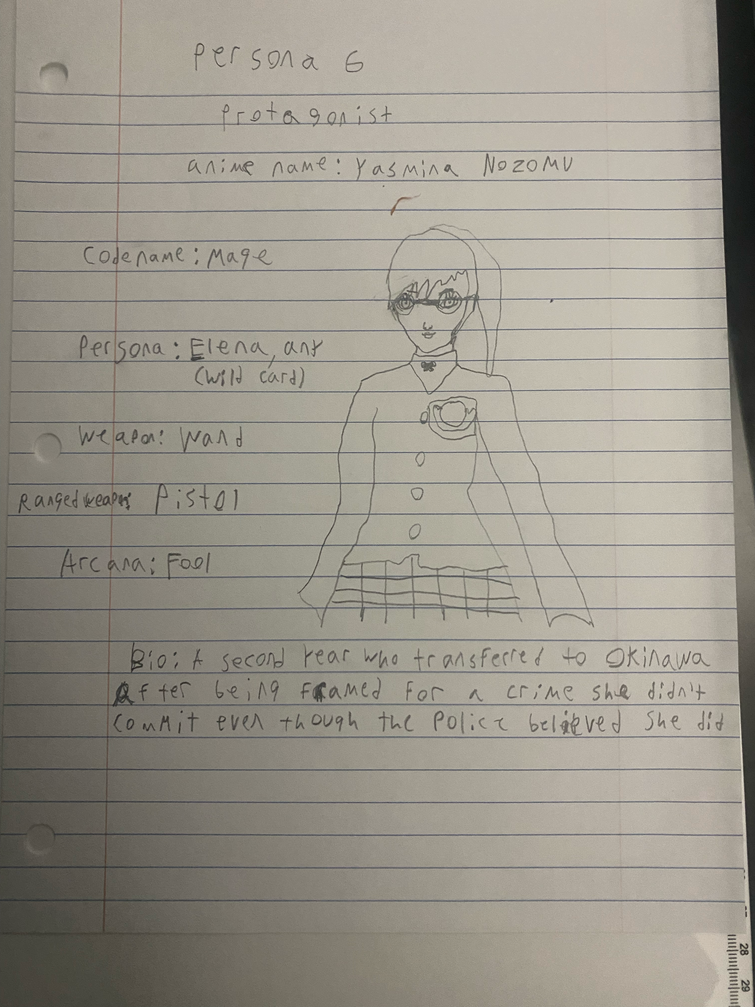 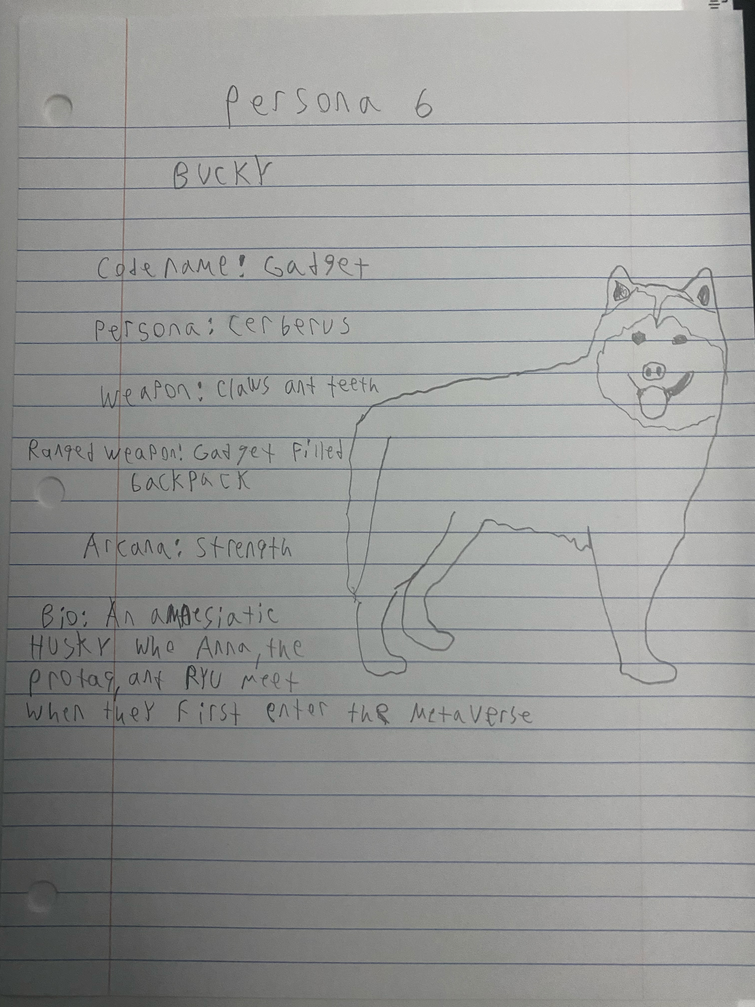 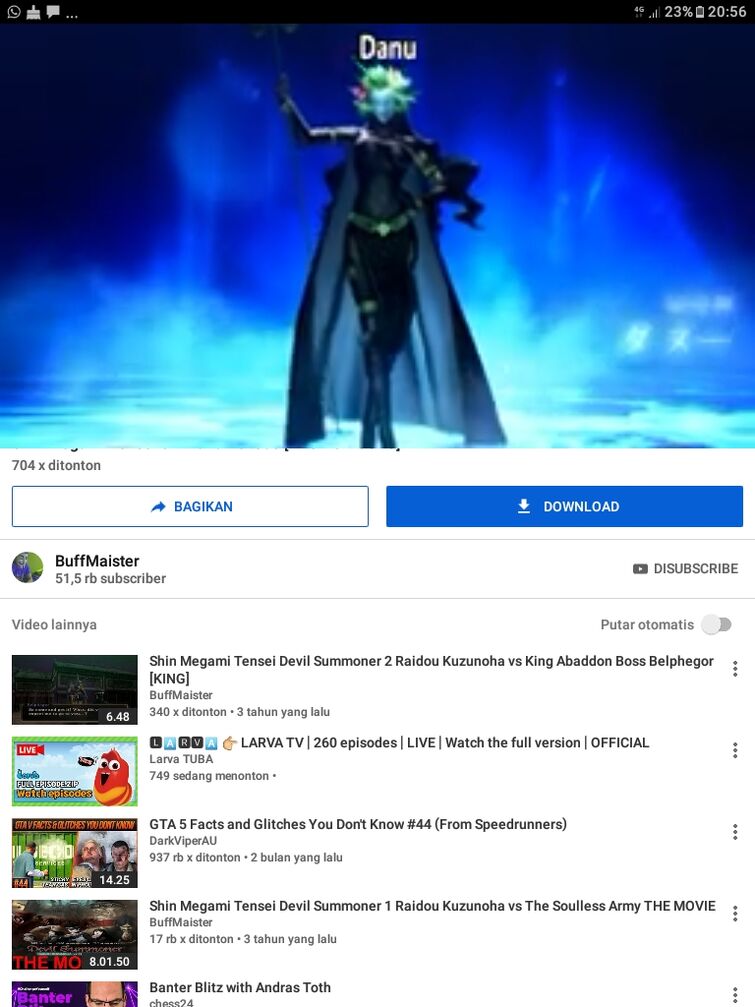 One glaring possibility is Makoto and Sae’s hair color 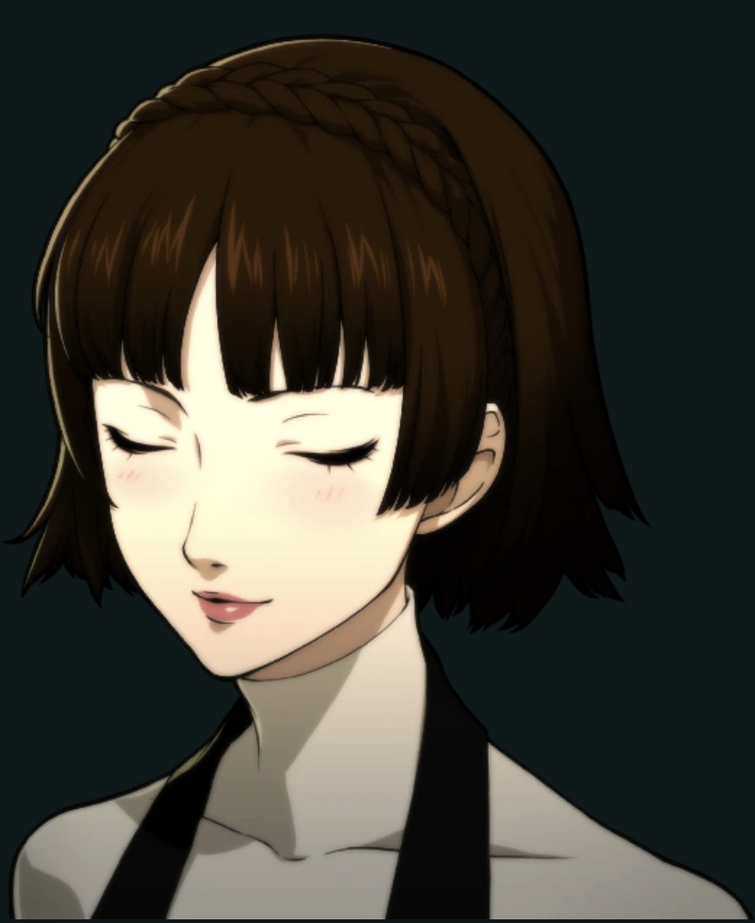 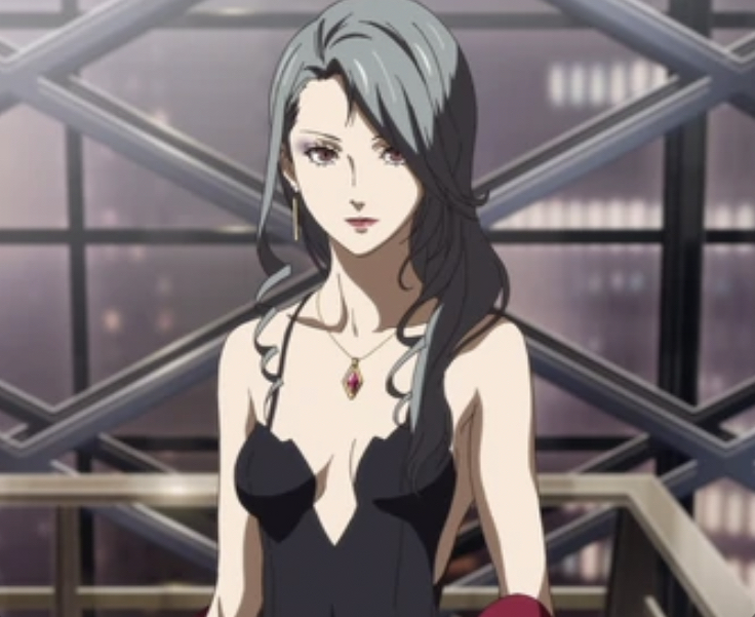 Are they connected to each other, like is nocturn maybe a sequel to dds or something(plz no spoilers I just started nocturn and haven’t played dds yet)

Just a query to whichever mod/mods are deleting the awful posts that keep getting posted - they seem to be creating new accounts each time. Does a request need to be put in to have them IP banned?

In my last post, I mentioned the idea of Strikers getting a challenge mode DLC. Well, I came up with some ideas that I would like to share. For this list, every battle will have an EX variant that either makes them harder, or throws in gimmicks. Also, they will all have names because why not. With that out of the way, here are my ideas.